Christians are monotheistic - they believe there is only one God.

Christians believe that God created everything, he created the heavens and the earth.

God formed Adam and later Eve from his own image and this is how humanity started.

God planted a Garden of Eden for Adam and Eve to live in, but were told not to eat the fruit from the tree of knowledge of good and evil.

Satan, in the guise of a snake, first tempted Eve, and then Adam, to eat the forbidden fruit.

From that moment onwards humankind would know shame, suffering and death.

After many generations God chose Abraham, who was raised by idol-worshipping parents, to leave his home in search of a promised land. He was the first person to teach the idea that there was only one God. Abraham found the promised land, and a relationship with God - he founded the Jewish faith, which, through his descendants, has continued  to the present day, when there are around 14 million followers.

Jesus' parents were descendants of Abraham and King David. Joseph's wife Mary is believed to have been impregnated by the Holy Spirit, having a virgin birth. She gave birth to Jesus, who was laid in a manger (food trough for animals) and grew up as a Jew.

Jesus grew up to be a carpenter and was sinless.

At the age of 30 he started preaching and at 32 he was baptised by John the Baptist, as Jesus was to start his greatest ministry.

Jesus chose from his followers twelve disciples who could become messengers to spread the word and later establish churches across the Roman Empire.

Eventually, Jesus was arrested by priests and by elders at the Garden of Gethsemane and dragged before Pontius Pilate, the Roman prefect (governor) of Judaea. Pilate presided over Jesus' trail and later ordered his crucifixion.

Jesus could have saved himself but allowed himself to be crucified and die to save mankind as a sacrifice for God's demands for sin to be punished.

After Jesus' death, the disciples became apostles, which is a Greek word meaning "ones sent forth". They travelled around Judea, Asia Minor, Greece and Rome, spreading the word of God. They gathered interested people together in each of many locations and taught them about Jesus, appointing elders who established churches to continue their work.

It is believed that scholars and scribes took the writings of Moses, other scribes, prophets and his disciples and created the Bible. Christians believe humans held the quill but God ultimately wrote the words through them. 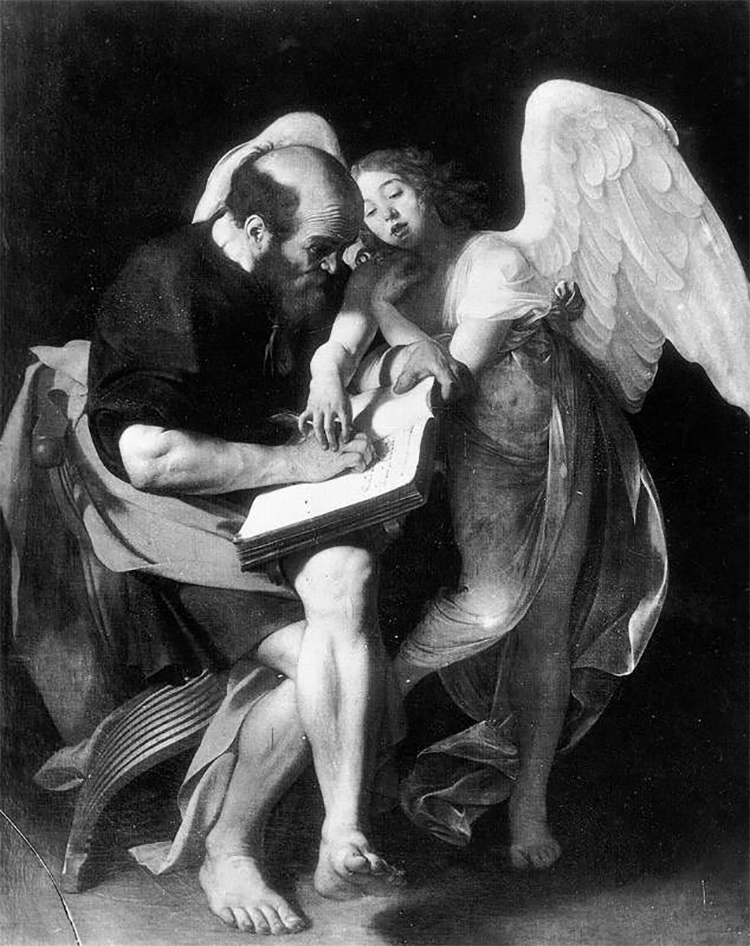 Saint Matthew and the Angel - Caravaggio, 1602