Motor neurones are the nerve cells that control muscle and gland activity. The muscles and glands are known as effectors.

Motor neurones carry signals from the CNS to the effectors to get a response, such as contracting a muscle to move a limb, or releasing a hormone from a gland to make the kidneys retain more water in the body.

The keep-fit fanatic bought a new bodyguard who drove her motor (motor neurone) alongside her, shouting messages from her muscle car (muscle control) for her to run faster.

In this example, a pain receptor in a finger sends an impulse via a sensory neurone to a relay neurone in the spinal cord. The relay neurone transfers the impulse to a motor neurone, which in turn transfers it to an arm muscle, causing the arm muscle to contract and bend the arm, moving the finger away from whatever is causing the pain (perhaps a sharp point, or a flame).

Sensory neurones are cells that carry signals from sense organ receptors to the central nervous system (spinal cord and brain).

Sensory man (sensory neurone) was working in a hotel, taking messages from the reception (receptors) desk.

Sensory Man has some features exaggerated to emphasise the more sensitive parts of his body.

Sensory neurones are vital for the efficient functioning of our five senses – vision, hearing, smell, touch and taste. They carry signals that the brain needs in order to, for instance, make images from what the eyes see, determine what type of surface the fingers are touching, or detect what’s hot and what’s cold.

Sensory neurones are the body’s electrical wiring for incoming information. Messages from sense organs can either trigger a reflex action, or reach the brain where a decision is made about what to do in response to the signal.

a) Relay neurone that links between sensory and motor neurones

Some relay neurones located in the spine are involved in reflex actions. In the diagram below, someone’s finger feels the heat of a flame. The heat is picked up by receptors in the skin. The signal from the receptors travels along sensory neurones to the spine. The signal is then transferred to the relay neurone (interneurone), and from there to the motor neurone, which carries the signal to the effector (in this case a muscle). The muscle performs the required action, moving the arm away from the flame. 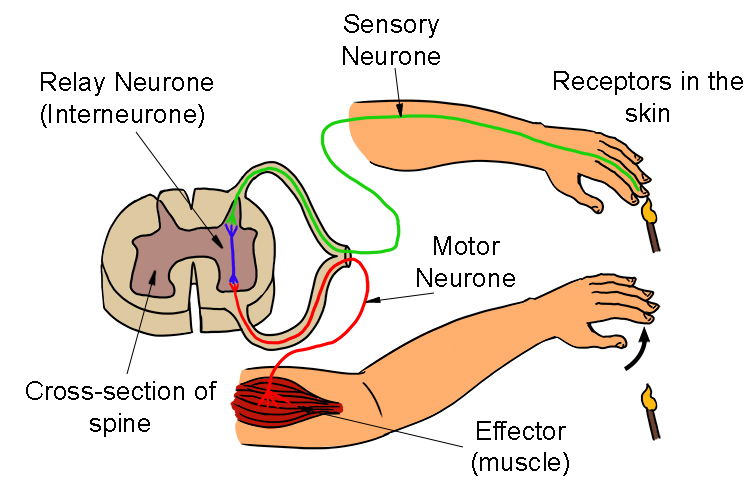 b) Relay neurones in the brain

Some relay neurones connect circuits of neurones in one region of the brain with those in other regions. This interaction between relay neurones enables the brain to perform complex functions such as learning and making decisions.

There are more than 100 billion relay neurons in the human body, and most of them are in the brain.

Three types of neurone are shown above. Each is recognisably different from the other. However, all neurones do the job of transmitting impulses.

Typically, axons conduct electrical impulses away from the neurone’s cell body, but note that the peripheral axon of the sensory neurone above conducts impulses from the periphery to the cell body.

The two lines across the axons indicate that they are actually longer than shown here. Some types of axon are a metre long!