The New Green Revolution – large increase in crop production in developing countries through use of artificial fertilisers, pesticides, high-yield crop varieties and biotechnology

The "new" means that improvements in crop yield should come with minimal environmental damage. 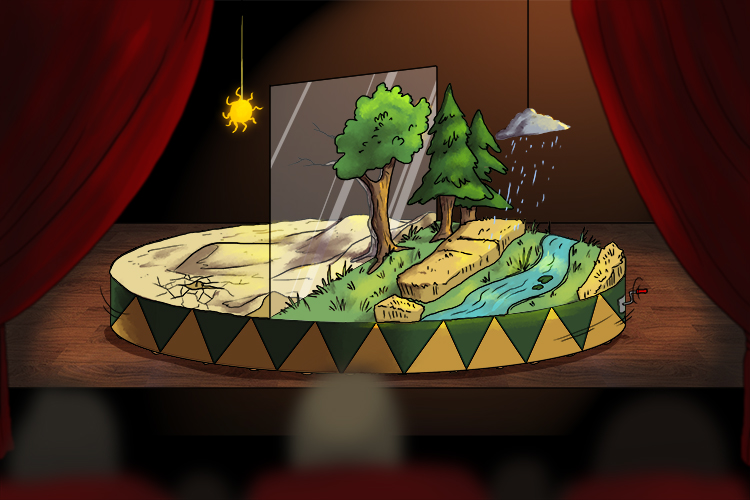 The new green scene came with the revolution of the stage (the new green revolution). As the stage turned the land in front of the audience went from dry and arid to lush and verdant.

The original 'green revolution' of the 1960s was mostly about the development of new strains of plants known as high-yielding varieties (HYVs). These gave the world higher yields of rice, maize and other important crops.

This went hand-in-hand with the development of chemical fertilisers, herbicides and pesticides, leading to a significant increase in production and a reduction in food prices.

However, the global population has continued to grow and crop yields are no longer increasing at the same rate. This has resulted in a new green revolution in which biotechnology plays a major part.

This includes transferring genes from one plant to another to give the new plant 'improved' characteristics. Modifications include creating plants that are resistant to herbicides, pests and diseases. Other genetic modifications include increasing the shelf life of food, creating drought-resistant crops, and increasing vitamins and proteins in food.

However, there is concern about the effects of genetically modified (GM) crops on human health and the environment. This is particularly the case in Europe, where there are more rules and regulations. There is less concern in the USA and Australia, where GM food is more common.

Intercropping – the simultaneous production of multiple crops on the same area of land – could also have a role in the new green revolution. Two examples of intercropping are the growing of chickpea with upland rice, and sweet potato with corn.