Anne Frank – teenager who hid from Germans in the attic of a Dutch house with her Jewish family, but was found and later died in a concentration camp. Wrote a famous diary 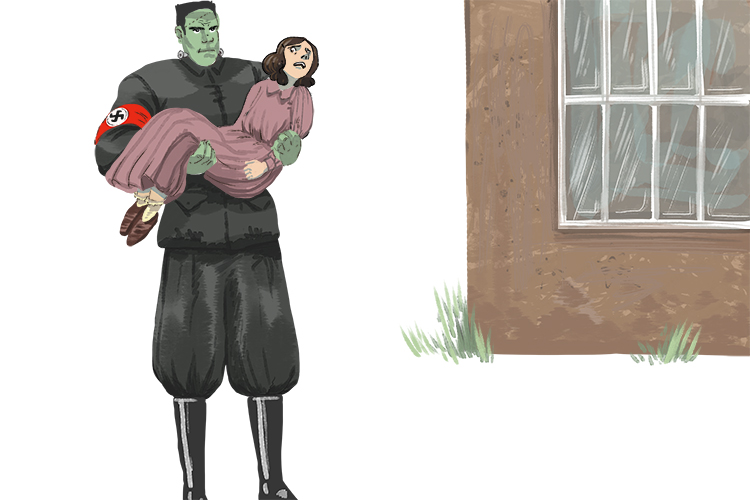 An angry Frankenstein's monster (Anne Frank) took Anne Frank away to a concentration camp from her Amsterdam house.

Anne Frank was a member of a Jewish family living in Amsterdam when the Germans occupied The Netherlands during World War II.

As the Nazis introduced more and more restrictions and controls over Jewish people and began moving many out of the country to concentration camps, Anne's family moved from their home and hid in the attic rooms of an annexe at her father's business premises near the centre of Amsterdam.

On her thirteenth birthday, shortly before the family went into hiding, Anne was given a diary. During the family's two years in hiding, she wrote about events in the secret annexe and about her feelings, thoughts and hopes for the future.

A little later on, she started to rewrite her individual diary entries into one running story, which she called Het Achterhuis (The Secret Annexe).

On August 4, 1944, Anne and other people in hiding were discovered and arrested. Two people who had helped conceal them were also taken away. Anne had been in hiding for 761 days.

However, Anne's writing was preserved – two other people who had helped the Frank family took the documents before the annexe was emptied by order of the Nazis.

All those arrested at the annexe were sent by train to the Auschwitz-Birkenau concentration and extermination camp in Poland. They were packed closely together in cattle wagons.

Upon arrival at the camp, many from the train were immediately taken to the gas chambers, but Anne, her sister and their mother were sent to a labour camp for women. Anne's father, Otto, ended up in a camp for men.

In November 1944, Anne was transferred to the Bergen-Belsen concentration camp in Germany with her sister. Their parents continued to be kept at Auschwitz.

In the horrendous conditions at Bergen-Belsen, Anne and her sister caught typhus. They both died in February 1945.

Anne's father was the only person from the secret annexe to survive the war. Upon his return to the Netherlands, friends convinced him to publish Anne's story from the saved documents. In June 1947, 3,000 copies of Het Achterhuis (The Secret Annexe) were printed.

The book was later translated into nearly 70 languages and adapted for stage and screen. People all over the world became familiar with Anne's story – around 30 million copies of her book have been sold. The English version went under the title The Diary of a Young Girl.

Interesting fact: In 1960, the family's hiding place became a museum: the Anne Frank House. The house has more than 1.2 million visitors from all over the world every year.