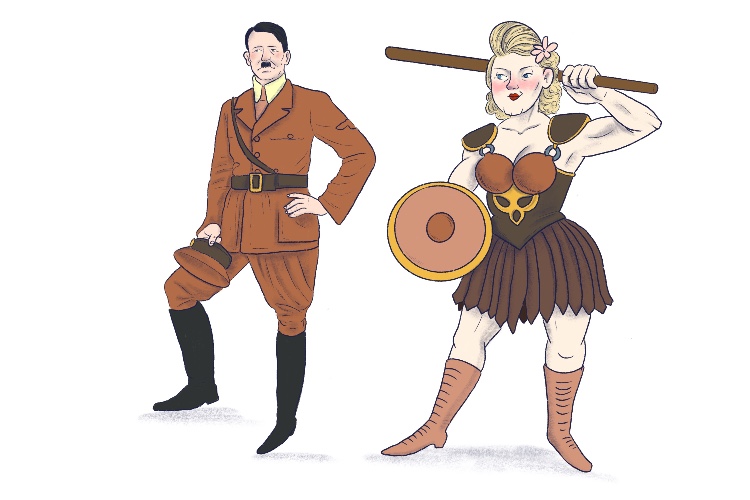 In the evening (Eva) she wanted to look brawny (Braun) and both dressed in brown (Braun).

NOTE: We have used 'brawny' and 'brown' because 'brawny' may be difficult to remember.

Eva Braun had recently left convent school when, in 1929, she first met the man who would later become her husband for just 40 hours, Adolf Hitler.

At the time, she was working as an assistant and model for Hitler's personal photographer. Braun was just 17 and Hitler was 40.

Hitler at that time was living with his half-niece, Geli Raubal, in a Munich apartment. In September 1931, Raubal was found dead, apparently having committed suicide with Hitler's pistol.

Hitler began seeing more of Braun after Raubal's suicide. Braun herself attempted suicide twice, each time because she felt she was being neglected by Hitler, and wanted more of his attention.

In 1936 she moved to Hitler's holiday home in Bavaria where she became his hostess. She was reserved, took little interest in politics and kept her distance from most of the Führer's associates, leading a very isolated life in Bavaria and later in Berlin.

Hitler and Braun rarely appeared together in public and few Germans even knew of her existence.

Braun spent most of her time exercising, brooding, reading books and watching romantic films. However, her loyalty to Hitler never wavered. After he survived the July 1944 plot to assassinate him, she wrote him an emotional letter which ended: "From our first meeting I swore to follow you anywhere – even unto death – I live only for your love.'

In the early hours of April 30 1945, they said their farewells to staff and members of the inner circle. Later that afternoon, after the sound of a gunshot, Hitler's valet and an SS adjutant found the lifeless bodies of Hitler and Braun on a small sofa. Braun had bitten into a cyanide capsule and Hitler had shot himself in the right temple with his pistol. Braun was 33 years old when she died. Hitler was 56.

Interesting fact: Germany's transition into a "total war economy" meant banning production of some items considered non-essential. Eva Braun reacted indignantly to a proposed ban on women's cosmetics and luxuries, resulting in Hitler introducing a softer policy which meant such items would still be available.