Franklin Delano Roosevelt – President of the USA from 1933 until 1945

He switched most USA manufacturing to war products to win the war. Roosevelt was disabled and used a wheelchair. 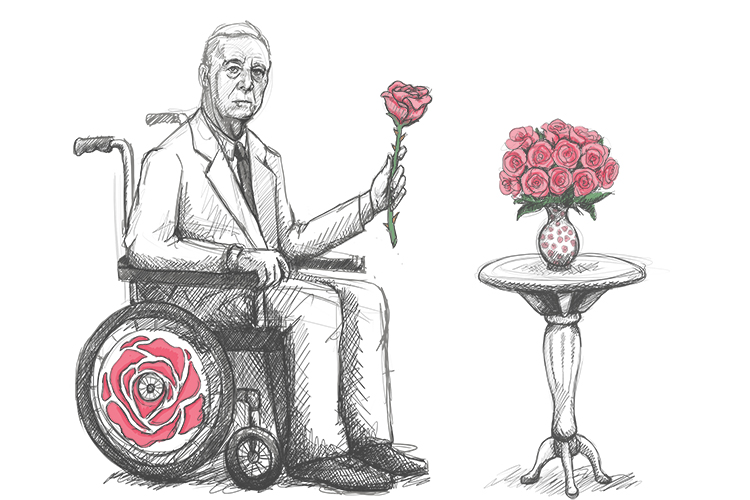 Frankly, the roses felt (Franklin D. Roosevelt) prickly but he didn't care, he wanted them everywhere, they even covered his wheelchair.

Franklin D. Roosevelt (known widely as FDR) became 32nd President of the U.S. in 1933. He had been using a wheelchair since 1921 when he was stricken with polio and, for a while, became completely paralysed. He never abandoned hope that he would regain the use of his legs.

His record stint as President – it lasted for 12 years until 1945, when he died in office a few months before the end of World War II – started at a very difficult time for America. The country was in the grips of the Great Depression. Most banks had closed down, industrial production had fallen by almost half and 13 million were unemployed. Roosevelt's policies – called the New Deal – and his "Fireside Chats" radio broadcasts helped restore confidence.

When World War II broke out, America was not immediately involved. The U.S. Congress was dominated by members who did not want America to be embroiled in a European war. However, the U.S. agreed to support Britain with "all aid short of war".

When Japan joined the Axis Powers of Germany and Italy, Roosevelt restricted exports to Japan of supplies that could be used to make war equipment. In response, Japan bombed Pearl Harbor, Hawaii, on December 7, 1941. The attack destroyed or damaged nearly the entire U.S. Pacific fleet and hundreds of planes and killed about 2,500 military personnel and civilians.

With the U.S. now fully involved in the war, Roosevelt took the lead in forming a grand alliance among all countries fighting the Axis Powers. He had a number of well-publicised meetings with British wartime Prime Minister Winston Churchill and Russian leader Joseph Stalin.

Roosevelt did not live to see the end of the war in either Europe or the Pacific. He died following a brain haemorrhage on April 12 1945, aged 63. He was replaced by his Vice President, Harry S. Truman, who brought the war in the Pacific to an end by ordering the dropping of nuclear bombs on Hiroshima and Nagasaki.