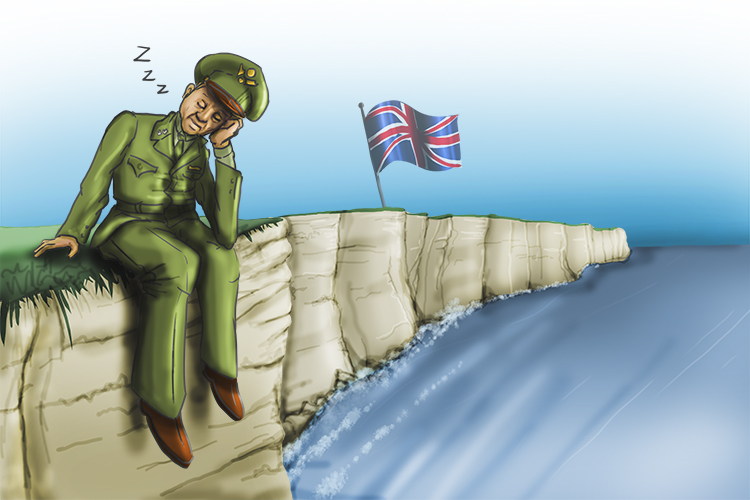 From the White (Dwight) Cliffs of Dover, he commanded the Allied forces but he just needed to rest his eyes for an hour (Eisenhower).

Some of the lessons learned in that operation helped him in his next major campaign – the D-Day Landings, also known as Operation Overlord, on the beaches of Normandy in Northern France in 1944. Again, the operation was successful, but with huge numbers killed and wounded on both sides.

Eisenhower came from a modest background. He was born in Denison, Texas, in 1890, the third of his parents' seven sons. The family lived in a tiny house by the railroad tracks. Father, David, cleaned railway engines for a living.

When Dwight was just a toddler, the family moved back to their original hometown, Abilene, in Kansas, so that David could take a better job at his brother-in-law's creamery.

After graduating from high school – where he excelled at baseball and American football – Eisenhower joined his father at the creamery while also moonlighting as a fireman.

His military career began in 1911 when he landed an appointment at the United States Military Academy in West Point, New York, where attendance was free of charge. He became a star on the football field until a series of knee injuries forced him to stop playing.

In 1915, Eisenhower graduated from West Point and was commissioned as a second lieutenant.

In 1917, the U.S. entered World War I and Eisenhower hoped to be commissioned overseas. However, he was appointed to run a tank training centre in Gettysburg, Pennsylvania. Throughout that war, and afterwards, Eisenhower continued to rise through the ranks with appointments at various U.S. military bases. From 1935 to 1939 he served under General Douglas MacArthur as assistant military adviser to the Philippines.

Interesting fact: After the Soviet Union launched Sputnik, the world's first artificial satellite, in 1957, Eisenhower authorised the establishment of NASA, which led to the Space Race.