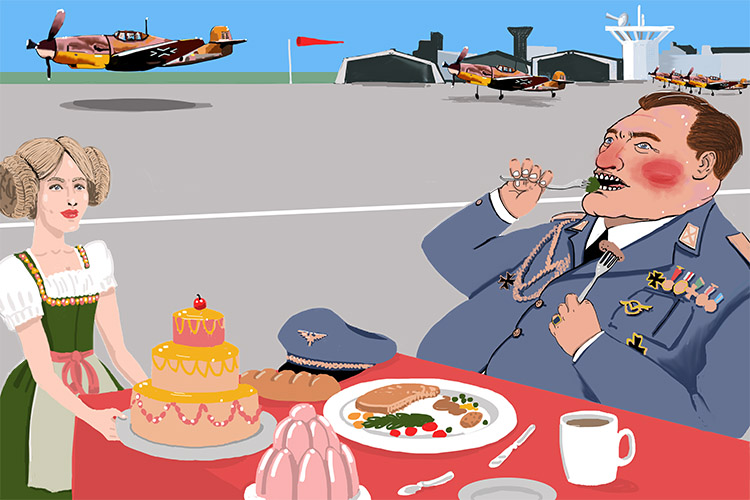 Her man (Hermann) kept gorging (Göring) on food until he couldn't fly because he was too heavy!

Hermann Göring (sometimes spelt Goering) was appointed Minister Without Portfolio when Adolf Hitler became Chancellor of Germany in 1933. One of his first jobs was to oversee the creation of the Gestapo, the Nazis' secret police, which he handed over to Heinrich Himmler in 1934.

He amassed power to become the second most powerful man in Germany after Hitler and was appointed Commander in Chief of the Luftwaffe (air force). Göring was also entrusted with the mobilization of all sectors of the economy for war, a role that brought many government agencies under his control. In 1939 Hitler made Göring his deputy and successor.

After the fall of France in 1940, Göring was given the specially created rank of Reichsmarschall, which gave him seniority over all officers in Germany’s armed forces. However, he lost favour with both Hitler and the German public when the Luftwaffe failed to prevent the Allied bombing of Germany’s cities and was also unable to resupply Axis forces on the Russian front. He increasingly withdrew from the military and political scenes and concentrated on collecting property and artwork, much of which was stolen from Jewish victims of the holocaust.

Near the end of the war, Göring heard that Hitler was intending to commit suicide. He sent a request for permission to assume control of the Reich, but Hitler removed him from all his positions, and from the party, and ordered his arrest.

After the war, Göring was convicted of conspiracy, crimes against peace, war crimes and crimes against humanity. He was sentenced to death but committed suicide by taking cyanide the night before he was to be hanged.

Interesting fact: Göring was wounded in Hitler’s attempted coup – called the Beer Hall Putsch – in 1923. As a result of treatment for his injuries, he became addicted to morphine, an addiction that persisted until the last year of his life.