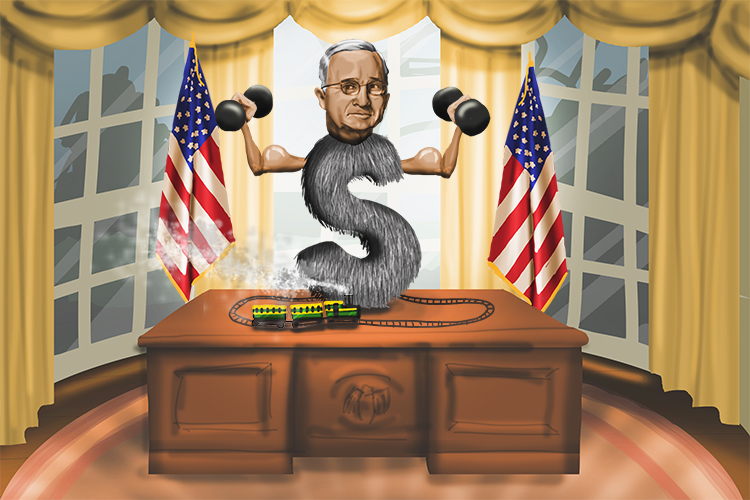 Hairy 'S' true man (Harry S Truman). He became President in 1945 during the very last year of the war.

NOTE: In Mammoth Memory number 45 is a RAIL (railway set) which can be seen on his desk.

Harry S. Truman will always be remembered as the U.S.President who authorised the first use of nuclear bombs in Hiroshima and Nagasaki, Japan, in August 1945.

Truman became Vice President to Franklin D. Roosevelt when Roosevelt won a record fourth term of office at the end of 1944, taking office in January 1945. His Vice Presidency lasted just 82 days – Roosevelt died suddenly of a cerebral haemorrhage on April 12, 1945.

Taking over as President, Truman initially felt ill-equipped for the role, as Roosevelt, who had not realised how ill he was, had made little effort to inform Truman about current programmes and plans.

However, he began his presidency with great energy, helping to arrange Germany’s unconditional surrender and travelling to Potsdam, near Berlin, in July 1945 for a meeting with Allied leaders to discuss the fate of postwar Germany.

While in Potsdam, Truman received word of the successful test of an atomic bomb back home in New Mexico, and it was from Potsdam that he sent an ultimatum to Japan to surrender or face “utter devastation”.

Japan did not surrender. Truman's advisers estimated that up to 500,000 Americans might be killed in an invasion of Japan. In August 1945, he authorized the dropping of atomic bombs on the cities of Hiroshima (August 6) and Nagasaki (August 9). It is estimated that more than 100,000 men, women, and children died. A few days later, Japan announced its unconditional surrender.

It remains the most controversial decision ever made by a U.S. president – one that experts continue to debate today.

Truman came from humble beginnings – his father was a mule trader and farmer. One of his first jobs was as a bank clerk in Kansas City. In 1914, following his father's death, he took over management of the family's farm.

When the U.S. entered World War I in 1917, Truman – then nearly 33 – immediately volunteered. He served in France as captain of a field artillery unit. The men under his command were devoted to him, admiring his bravery and even-handed leadership.

He launched his political career in 1922, eventually becoming a Senator for the state of Missouri.

In 1948, against the odds, and largely due to his energetic campaigning throughout America, Truman won a second term as President.

Interesting fact: Truman took a firm stand against communism. In 1948, he signed the Marshall plan, which committed $15 billion for the restoration of postwar Europe – an act which helped prevent the spread of communism across the continent. The Marshall Plan was seen by many as the start of the Cold War between Eastern Europe and the West.