Heinrich Himmler – Head of the SS and Gestapo 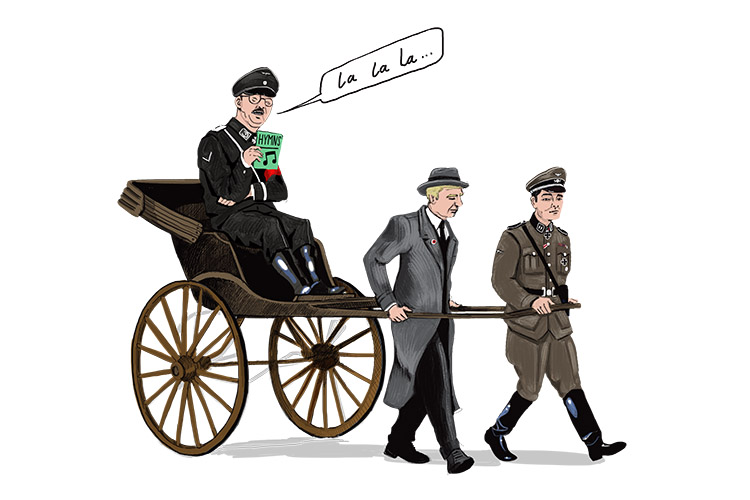 High up on a rickshaw (Heinrich) while singing hymns, "La la la" (Himmler), Heinrich Himmler was pulled along by his own SS and Gestapo officers.

Himmler was one of the most powerful men in Nazi Germany and a main architect of the Holocaust.

Heinrich Himmler was appointed Reichsführer of the SS, the German paramilitary organisation, by Adolf Hitler in 1929. Over the following 16 years, Himmler developed the SS from a battalion of 290 men into a million-strong paramilitary organisation. He also set up and controlled the Nazi concentration camps, and was head of the Gestapo, the Nazis’ secret police. He was credited with being the chief architect of the “Final Solution”.

From 1943, he was both Chief of German Police and Minister of the Interior in charge of all internal and external police and security forces.

At Hitler’s behest, Himmler organised the building of extermination camps and directed the killing of around six million Jews and other victims.

Late in the war, Hitler made Himmler a military commander but he failed to achieve his assigned objectives and was replaced. He lost all his posts in April 1945 when he tried to open peace talks with the Allies without Hitler’s knowledge.

Himmler was arrested by British forces but committed suicide while in custody.

Interesting fact: Himmler had a deep interest in occultism, interpreting neopagan beliefs to promote the racial policy of Nazi Germany, and incorporating symbolism and rituals into the SS.