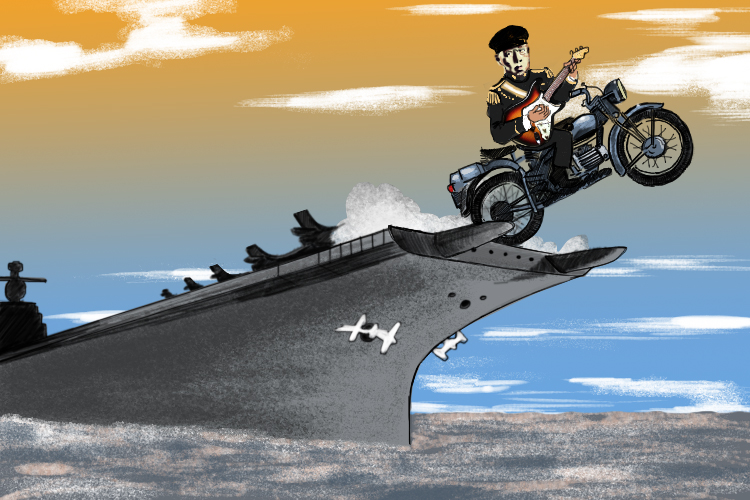 I saw you rock (Isoroku) with your Yamaha motorcycle (Yamamoto) on your aircraft carrier.

Admiral Isoroku Yamamoto was the commander of the Japanese Combined Fleet during World War II. He planned and executed the attack on Pearl Harbor in Hawaii on December 7, 1941.

Although he was initially against the war, Yamamoto still planned and participated in many of the most important battles.

Yamamoto was 16 when he entered an Imperial Japanese Naval academy in 1900. He graduated four years later and was assigned to a cruiser. In a battle against the Russians in 1905, he lost two fingers and earned the nickname "80 sen", as a manicure cost 10 sen per finger at the time (a sen was one-hundredth of a Japanese yen).

In 1913 he was sent to Naval Staff College, graduating two years later as a lieutenant commander, and a few years afterwards, in 1919, he left Japan for the United States where he spent two years studying the oil industry at Harvard University.

He returned to Japan in 1923 and continued his naval career, earning several promotions over the years. He changed his speciality from gunnery to naval aviation after taking flying lessons. For a while he was the director of a flying school, producing elite pilots for the navy.

Yamamoto returned to the U.S. in 1926 for a two-year stint as the Japanese naval attaché in Washington.

Returning to Japan, he became captain of an aircraft carrier. A series of promotions culminated in him being made Vice Minister of the Navy, where he argued strenuously for more emphasis on naval aviation.

On August 30, 1939, Yamamoto was made Commander in Chief of the Combined Fleet and in November 1940 he was promoted to Admiral. Despite the promotion, he thought he might lose his command when Hideki Tojo became Prime Minister of Japan in 1941. Yamamoto and Tojo were old adversaries – Yamamoto had opposed many of Japan's previous military adventures and had warned that if Japan fought the United States he expected Japan to be successful for only six months to a year.

However, when war with the U.S. began to look inevitable, Yamamoto planned his strike to destroy the Americans' Pacific fleet at Pearl Harbor. Six of Yamamoto's carriers sailed for Hawaii on November 26, 1941, attacking on December 7. They sank four battleships and damaged four more – thus bringing the U.S. into World War II.

After the triumph of Pearl Harbor, Yamamoto's ships and aircraft picked off Allied forces across the Pacific. However, his winning streak came to an end with the Battle of Midway, which was a resounding victory for the United States. Yamamoto was forced to assume a defensive posture as the U.S. and other Allied forces gradually took control of the Pacific.

Yamamoto died in April 1943 when the aircraft carrying him on an inspection tour of the South Pacific was shot down by an American P-38 Lightning plane.

Interesting fact: Isoroku in Japanese means 56, which was the age of his father when Isoroku was born. His original family name was Takano, but following the death of his parents he was adopted into the Yamamoto family and assumed their name.