NOTE: This led to the dropping of the first atomic bomb on civilians in Hiroshima, Japan. 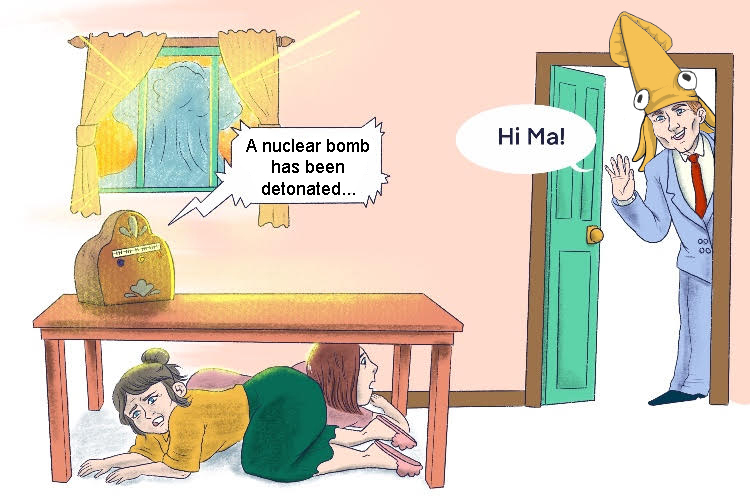 He opened the door and said "Hi Ma" (Oppenheimer) to find the family under the table because it had been announced that a nuclear bomb had been dropped.

NOTE: The man had a weird hat on. (Manhattan)

Robert Oppenheimer was the head of the Los Alamos Laboratory, also known as Project Y, established by the Manhattan Project to design and build the first atomic bombs during World War II. Although the laboratory was located in New Mexico, it was operated by the University of California under contract to the U.S. War Department.

Oppenheimer – known as "the father of the atomic bomb" – was a tall, thin chain-smoker. He often forgot to eat during periods of intense thought and concentration. Originally a New Yorker, he attended Harvard University in the U.S. and Cambridge University in the UK. He worked with a number of leading physicists on projects that included theoretical astronomy, astrophysics and nuclear theory before being appointed head of the Los Alamos secret weapons laboratory in September 1942.

Oppenheimer was selected for the job by the director of the Manhattan Project, Brigadier General Leslie R. Groves, Jr, who was impressed by Oppenheimer's remarkable grasp of the practical aspects of designing and constructing an atomic bomb. Oppenheimer's past association with a number of communist causes was apparently outweighed by his in-depth understanding of nuclear physics.

The work Oppenheimer and his team of scientists did at Los Alamos resulted in the world's first nuclear explosion – a test near Alamogordo, New Mexico, on July 16, 1945.

This led to the first atomic bombs used in a war being dropped by the U.S. on Hiroshima and Nagasaki, Japan, in August 1945. The two bombs killed an estimated 120,000 people instantly and left tens of thousands injured. Many subsequently died of radiation poisoning.

He continued to be a high flier in physics after the Manhattan Project – for instance, from 1947 to 1952 he was Chairman of the General Advisory Committee of the Atomic Energy Commission, overseeing all atomic research and development in the U.S., while simultaneously holding several other important positions.

Robert Oppenheimer suffered ill health for much of his life – he contracted dysentery and, later, tuberculosis and suffered pain in the lumbar region of his spine. He failed a physical test he took at the start of his work at Los Alamos.

Interesting fact: Oppenheimer was interested in the Hindu religion of India. He read the Bhagavad Gita, a 700-verse Hindu scripture, in its original Sanskrit language, and said it was one of the books that most shaped his life. After the first atomic bomb was successfully detonated in New Mexico, he quoted from the scripture: "Now I am become death, the destroyer of worlds."