Adolf Hitler – Leader of Nazi Germany during the war. Possibly the most reviled man who ever lived 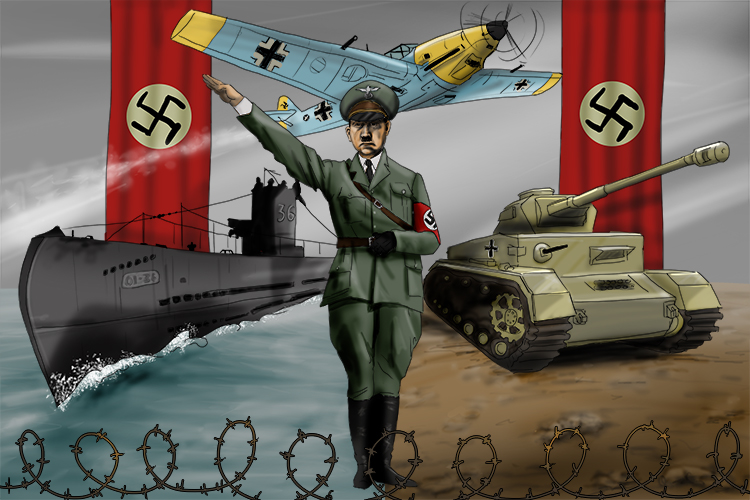 Everyone should know this monster.

Born in 1889 in a small town in Austria, next to the border with Germany, Adolf Hitler spent most of his childhood in Linz, the capital of Upper Austria. Linz remained his favourite city throughout his life and he expressed a wish to be buried there.

His father, who had worked as a customs official, died in 1903, leaving a pension to support the family. Hitler had feared and disliked his father but was devoted to his mother, who died in 1907. She had been his father's third wife. The couple had six children, but only Hitler and one of his sisters survived to adulthood. He had several half-siblings from his father's first two marriages.

He had a mixed record at school and never advanced beyond secondary education.

He dreamed of becoming an artist and used the small allowance he continued to draw from his father's pension to move to the Austrian capital, Vienna. He twice failed to get into the Academy of Fine Arts and lived a lonely life, drifting from one municipal hostel to another, with an irregular income from painting postcards and advertisements.

He was already showing traits that characterised his later life, including loneliness, secretiveness and hatred of the multinationalism he found in Vienna.

In 1913, Hitler moved across the border to Munich. Although classified as unfit for Austrian military service because of "inadequate physical vigour" in February 1914, when World War I broke out he joined the 16th  Bavarian Reserve Infantry Regiment, having petitioned Bavarian King Louis III to be allowed to serve. Serving throughout the war, he was wounded in October 1916 and gassed two years later at Ypres, Belgium.

Hitler was awarded the Iron Cross, Second Class, in 1914, and the Iron Cross, First Class, in 1918, for bravery in action. He had been continuously in the front line as a headquarters runner – a military courier carrying vital messages to, from and around the battlefront, one of the most dangerous jobs in the war.

After some time in hospital after the end of World War I, Hitler moved into political work in Munich. He joined the small German worker's party and in 1920 was put in charge of propaganda (biased information). That same year, the party was renamed National-sozialistische Deutsche Arbeiterpartei (the Nazi Party).

Hitler took full advantage of many Germans' widespread discontent at losing the First World War, the severity of the peace terms and the economic woes now besetting the country.

He attracted a devoted group of Nazi leaders, such as Rudolph Hess and Hermann Göring, whose names live on in infamy even today.

The party grew rapidly, and in November 1923 felt it was strong enough to seize power. In what became known as the Munich Beer Hall Putsch, Hitler and his acolytes tried to force leaders of the Bavarian government and the local army commander to proclaim a national revolution. In the melee that followed, the police and army fired on advancing marchers. Hitler was injured.

Later, he was imprisoned for five years for his part in the putsch, but served only nine months in relative comfort at Landsberg Castle. It was while he was in prison that he wrote the first volume of his two-volume book, Mein Kampf (My Struggle), his political autobiography and vision for a future Germany.

The German economy was improving by the time Hitler left prison and although the Nazi party continued to grow slowly, the public was less responsive to his calls for action. However, when the Depression (a worldwide economic crisis) hit in 1929, a new period of political instability began and the Nazis took full advantage, growing in popularity.

In January 1933, Hitler became Chancellor of Germany, responsible for all Government policies. Once in power, he established an absolute dictatorship.

In 1935 Hitler announced laws that denied Jewish people citizenship of Germany and prohibited them from marrying or having sexual relations with people of "German or related blood".

In 1938, he was looking beyond Germany's borders, eyeing up land to the east for Lebensraum – extra living space.

It was when the Hitler invaded Poland in September 1939 that Britain and France declared war on Germany.

The alliance of Germany, Italy and Japan (the Axis Powers) and its eventual nemesis, the Allies, comprising Britain, the United States, the Soviet Union and France along with 15 other nations, fought the biggest war the world has ever known. An estimated 60 million people were killed – 80 million if famines caused by the war are included.

Hitler's life ended in suicide at the age of 56, in April 1945. Knowing that he would lose the war, with Soviet troops advancing from the east and British, American and other Allied forces closing in from the West, he shot himself in his Berlin bunker. His wife of less than two days, Eva Braun, killed herself with a cyanide capsule.

Interesting fact: Hitler was said to be a teetotaler, nonsmoker, and vegetarian, but his apparently healthy lifestyle was undermined by alleged use of opiates. According to research, in 1941 his personal physician began injecting him with various drugs, including oxycodone, methamphetamine, morphine, and even cocaine.