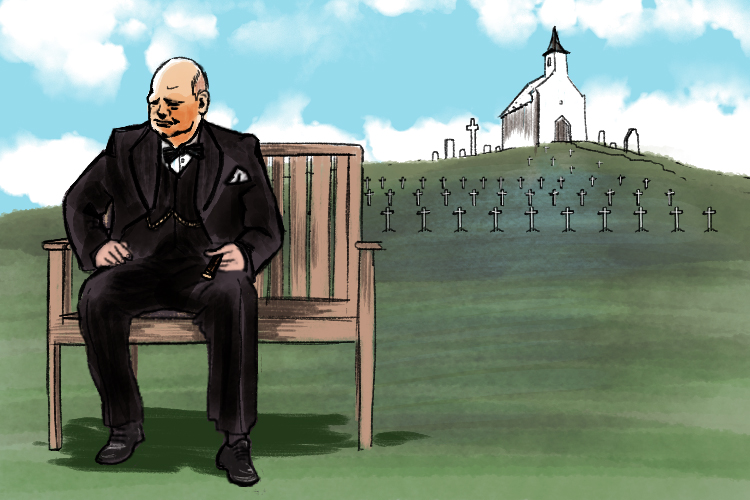 He wins tons (Winston) of battles but that church on the hill (Churchill) shows there were lots of deaths.

Winston Churchill's name is indelibly linked with the success of Britain and its fellow Allies in defeating Nazi Germany in World War II. He succeeded Neville Chamberlain as Prime Minister in 1940 and led the country through the most difficult time in modern history until the war's end in 1945. However, although highly respected as a great wartime leader, Churchill lost the 1945 General Election to Labour, who were seen as offering more for ordinary people in the wake of the biggest war the world had ever known.

Churchill was born in 1874 and first became a member of Parliament in 1900. Before World War II started he warned about the rise of Hitler and the Nazis, and what this could mean for the rest of Europe. His wartime leadership, during which he made many inspiring speeches, led to him being regarded by many as the greatest Briton of all time.

However, he was often deeply troubled and lived with bouts of depression throughout his life.

The aspects of his character that made Churchill a great wartime leader included his intense patriotism, belief in Britain's greatness, his knowledge of history, mastery of the art of politics, personal experience of war, inexhaustible energy and total concentration.

On September 3 1939, the day Britain declared war on Germany, Prime Minister Neville Chamberlain put Churchill in charge of the Admiralty, where he had worked previously before being demoted.

Germany's invasion of the Low Countries – Belgium, The Netherlands and Luxembourg – on May 10 1940 came as a huge blow on top of the invasion of Norway, and led to Chamberlain's resignation. It was obvious that Churchill was the only candidate who could unite and lead the nation. A coalition government – that included elements of all parties apart from the extreme left and extreme right – was formed with Churchill as its head. The nation took Churchill to its heart.

Two events that helped change the course of the war – which Germany had been winning convincingly – were the Nazis' decision to attack Russia and Japan's attack on Pearl Harbour in December 1941. Churchill was able to capitalise on both, constructing a "grand alliance" with the Soviet Union and the USA. With the U.S. now fully on board and Germany's resources stretched too far, the war began to turn in favour of the Allies.

Despite his popularity in the country as a wartime leader, in the General Election of 1945 Labour's proposals for economic and social reform proved a better match for the country's mood than the policies of Churchill's Conservative Party. Although he won his own seat in Woodford, Essex, Churchill saw his party reduced to 213 seats in a Parliament of 640.

The Conservatives lost again – but only narrowly – in 1950, and when another election was called in 1951, the Conservatives were returned to power, Churchill becoming Prime Minister again.

Churchill died in January 1965, aged 90. He was given a full state funeral.

Interesting fact: Churchill did not show great academic promise in his earlier years: he had a poor record of achievement at Harrow School, and it was only at the third attempt that he passed the entrance exam for the Royal Military College, now known as Sandhurst Academy.