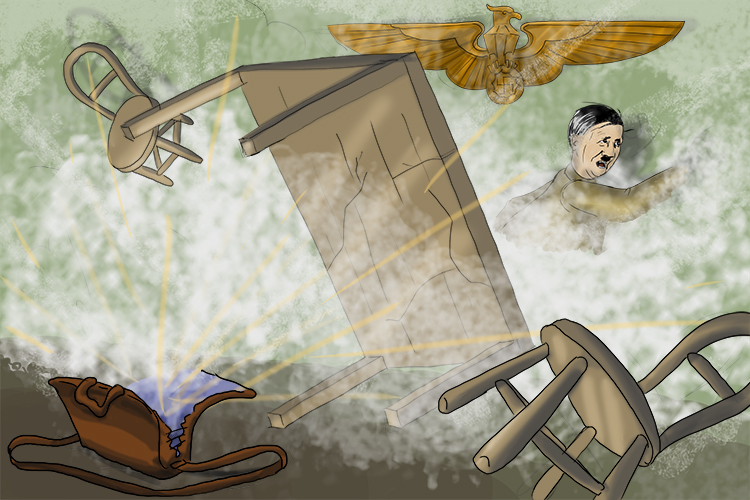 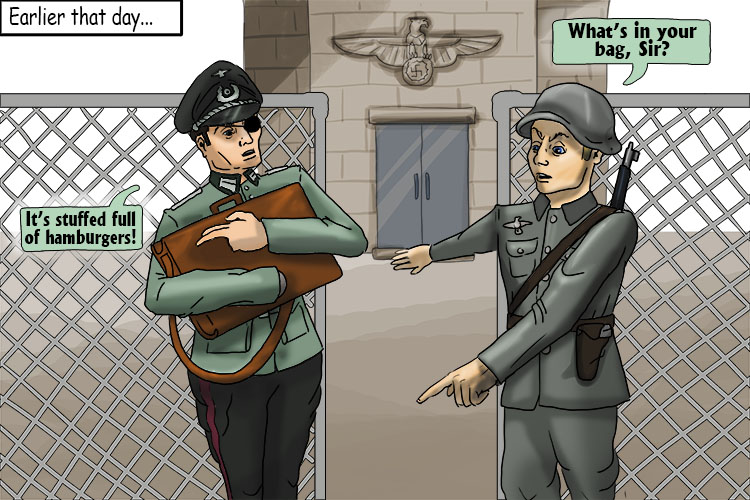 . . . He said it was stuffed full of burgers (Stauffenberg).

Claus von Stauffenberg is best known as the German army officer who, as the main conspirator of the July Plot, made an unsuccessful attempt to assassinate Adolf Hitler.

Von Stauffenberg joined the German army in 1926. He won distinction as a staff officer with a panzer (tank) division in campaigns in Poland and northern France in 1939 and 1940.

However, after being moved to the Eastern Front in the Soviet Union, he became disillusioned with the Nazis' brutal policies towards Slavs and Jews.

He was transferred, at his own request, to the North African campaign, in which he was severely injured, losing his left eye, right hand and the last two fingers of his left hand.

While recovering from his wounds, von Stauffenberg determined that Hitler had to be eliminated. He took the leading role in a conspiracy of army officers against the Führer, claiming for himself the task of carrying out the assassination.

The opportunity arose in July 1944, after von Stauffenberg had been promoted to Colonel and reassigned as Chief of Staff to the Reserve Army Command. The position gave him access to conferences and meetings attended by Hitler.

On July 20, 1944, von Stauffenberg placed a bomb at a meeting at Wolf's Lair, Hitler's Eastern Front military headquarters at Rastenburg, Poland. After von Stauffenberg made an excuse and left the meeting, the bomb exploded but Hitler was only slightly wounded.

A planned coup in Berlin the same day was also unsuccessful.

In an attempt to save his own life, one of the conspirators, General Friedrich Fromm, charged his fellow conspirators in an impromptu court martial and condemned the ringleaders, including von Stauffenberg, to death. They were summarily executed by a makeshift firing squad.

Eventually, more than 20,000 Germans were killed or sent to concentration camps in Hitler's purge following the attempted assassination and coup.

Interesting fact: Another central figure in the plot to assassinate Hitler was von Stauffenberg's eldest brother, Berthold. He was executed by slow strangulation in Plötzensee Prison, Berlin. The entire execution, which included multiple resuscitations before he was finally killed, was filmed for Hitler to view at his leisure.