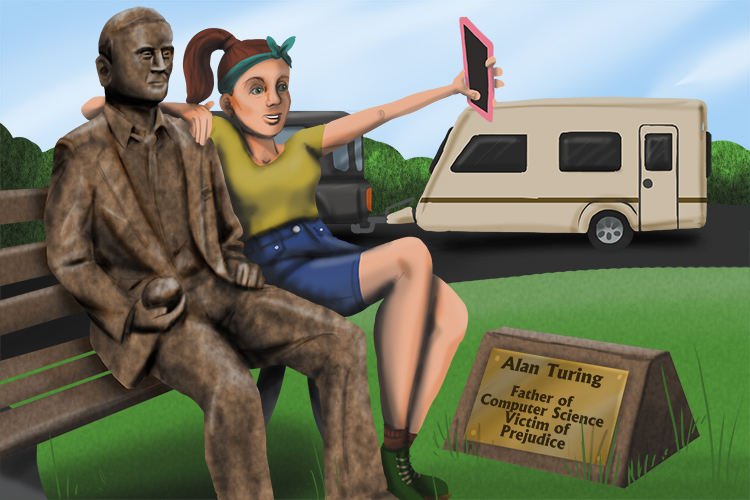 A land can be best searched touring (Alan Turing). You must not miss the Alan Turing memorial.

Alan Turing was a brilliant mathematician best remembered for his leading role in code-breaking work at Bletchley Park during World War II.

He made major contributions to cryptoanalysis, logic, philosophy, computer science and artificial intelligence.

After graduating in mathematics from King's College, Cambridge, and producing pioneering work as a Fellow at the same college, Turing moved to Princeton University in New Jersey, USA. There, he studied for a PhD in mathematical logic under the direction of Alonzo Church, a renowned American mathematical logician.

Returning to the UK in the summer of 1938, Turing joined the Government Code and Cypher School. At the outbreak of World War II the following year, he moved to the Cypher School's wartime headquarters at Bletchley Park in Buckinghamshire.

The main cypher machine for encrypting messages sent by the Germans was the Enigma. A Polish team had devised a machine – the Bomba – that could break the German codes, and the details had been passed on to the British. However, in May 1940 the Germans changed their coding procedures and the Bomba was rendered useless.

Turing and others at Bletchley designed a related, but very different, code-breaking machine known as the Bombe. For the rest of the war, Bombe machines supplied the Allies with large amounts of military intelligence from messages the Germans thought were indecipherable.

At the end of the war, Turing was awarded an OBE for his code-breaking work. Later, in 1951, he was elected a Fellow of the Royal Society. Despite this high honour, his life was about to become very difficult.

In March 1952 he was convicted of "gross indecency" for acts of homosexuality – a crime in Britain at the time – and was sentenced to 12 months of "hormone therapy". With a criminal record, he was no longer able to work for GCHQ, the British government's code-breaking centre.

Turing spent the rest of his career at the Univesity of Manchester, working on the theory of computing and what is now known as "artificial life". But on June 7, 1954, he was found dead in his bed, poisoned by cyanide. At the subsequent inquest, the verdict was suicide, but no motive was established. Many still regard Turing's death as suspicious.