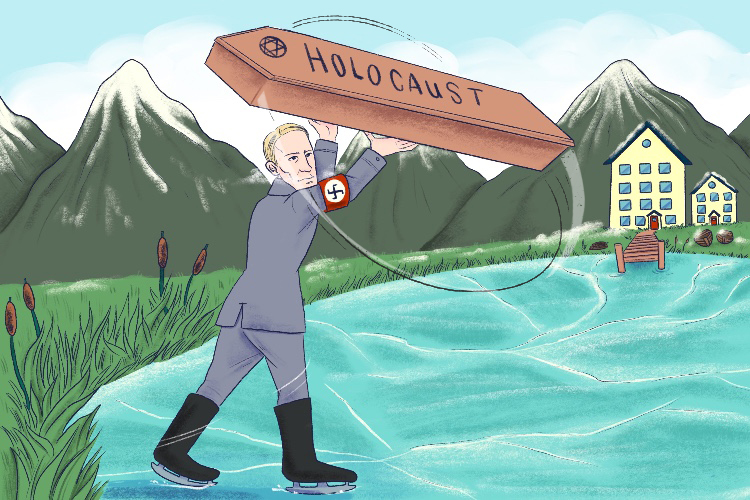 The Rhine river was hard (Reinhard) as he performed a high trick (Heydrich).

After Hitler became Chancellor of Germany in 1933, Reinard Heydrich – who until then had been in charge of the intelligence and surveillance arm of the SS – was appointed chief of the political department of the Munich police force. He rose quickly through the ranks of the Sicherheitsdienst (the security service known as the SD).

In 1934 he was appointed SS chief for Berlin, and two years later took overall charge of the SD, the criminal police and the Gestapo, the political police of Nazi Germany.

In November 1938, Heydrich ordered the arrest and imprisonment in concentration camps of thousands of Jews.

The following year, he became head of the Reichssicherheitshauptamt (Reich Security Central Office), which was in charge of all security and secret police in the Third Reich.

Along with Adolf Eichman, he organised the first deportations of Jews from Germany and Austria to ghettos in occupied Poland. Heydrich was also the organiser of mobile killing squads called the Einsatzgruppen (deployment groups) that murdered nearly a million Soviet and Polish Jews in German-occupied territories.

In 1941 he was commissioned to carry out a "final solution" to what the Nazis called "the Jewish question". He was authorised to take all steps necessary for the extermination of Jewish people and chaired the notorious Wannsee conference where senior Nazis discussed the logistics of achieving that aim.

Later that same year, Heydrich was made Governor of Bohemia and Moravia (now in the Czech Republic) where he combined repressive measures and mass executions with an attempt to win over Czech workers by improving social and economic conditions.

On May 27 1942, two Czech underground fighters fatally wounded him with a bomb while he was riding in his car without an armed escort. He died about a week later in a Prague hospital. Gestapo officials reacted by executing hundreds of Czechs and wiping out the entire village of Lidice.

Interesting fact: Heydrich had a number of nicknames which summed up his brutal nature. They included: The Butcher of Prague; The Blond Beast; Young Evil God of Death; and The Man with the Iron Heart.