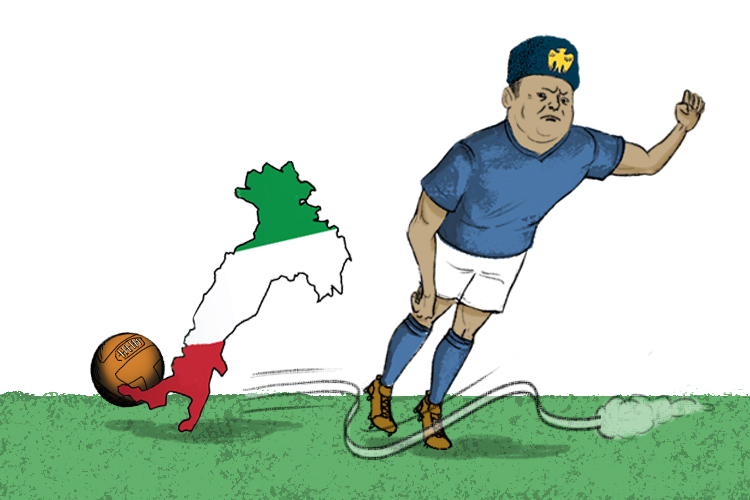 Bend your knee not your toes (Benito). You must not lean in (Mussolini). Even the Italian country kicks a football better.

Benito Mussolini, leader of Italy from 1922 to 1943, is renowned as the founder of Fascism.

He was born in Northern Italy in 1883, the son of a blacksmith. In 1902, due to lack of employment opportunities in the area, he moved to Switzerland where he became involved in socialist politics.

Returning to Italy in 1904, he worked as a journalist for the socialist press. However, his support for Italy's entry into that war marked his break with socialism and he was drafted into the Italian army in 1915.

In 1919, Mussolini formed the Fascist party. He gained the support of many unemployed World War I veterans, organising them into armed squads called Black Shirts. The Fascist Party was invited to join Italy's coalition government in 1921.

In 1922, the country was sliding into political chaos. The Black Shirts marched into Rome and Mussolini claimed he was the only person capable of restoring order. The Italian king invited him to form a Government.

Once in power, Mussolini dismantled democratic institutions and turned himself into a dictator. He became known as `Il Duce` and attempted to re-establish Italy as a great European power.

Italy increased its co-operation with Nazi Germany, culminating in an agreement known as the Pact of Steel in 1939. Mussolini was the first to refer to Italy, Germany and Japan as the Axis Powers of World War II.

However, after his declaration of war on Britain and France in 1940, Italy's military weaknesses were exposed and a series of defeats in North Africa, East Africa and the Balkans ensued.

In 1943, Allied troops landed in Sicily. Mussolini was overthrown and imprisoned by his former colleagues in the Fascist government. In September 1943 Italy signed an armistice with the Allies. The German army began an occupation of Italy and Mussolini was rescued by German commandos. He was made leader of a new government, but had little real power.

As the Allies pushed north through Italy, Mussolini fled towards Switzerland but he was captured by Italian communist partisans and executed by firing squad on April 28, 1945.

Interesting fact: Mussolini survived several assassination attempts. One was by a 15-year-old boy who tried to shoot him. The boy was lynched on the spot.