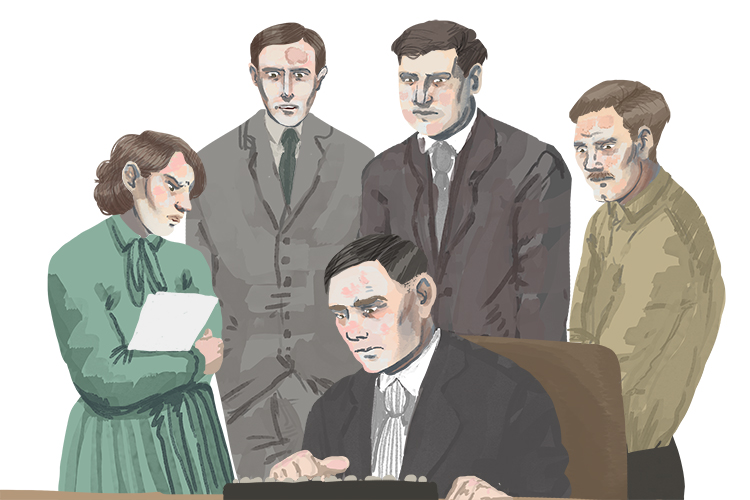 They were bleached and blotchy (Bletchley) after staying inside the Bletchley Park huts all day working out how to break the Enigma code.

Bletchley Park is a 19th century mansion and estate in Milton Keynes, Buckinghamshire, which became the home of the British Government Code and Cypher School.

As such, it became the main centre of Allied code-breaking during World War II.

The intelligence deciphered at Bletchley Park is reckoned by some experts to have shortened the war by between two and four years.

Turing, a brilliant mathematical logician, and the team developed deciphering machines that could quickly decode encrypted messages created by the Germans' Enigma and Lorenz cypher machines.

After the War, the rigorous secrecy imposed on Bletchley staff remained in force. Relatives of Bletchley personnel knew very little; only that a son, daughter, spouse or parent had done some kind of secret war work. Churchill referred to Bletchley staff as "the geese that laid the golden eggs and never cackled".

After the war, the Government Code and Cypher School became the Government Communications Headquarters (GCHQ), moving to Eastcote, north-west  London, in 1946 and then to Cheltenham in the 1950s.

Interesting fact: In 1991 the Bletchley Park Trust was formed to save large portions of the site from developers. Bletchley is now open to the public and houses interpretive exhibits and rebuilt huts as they would have appeared in wartime. Also on the site is the National Museum of Computing, which includes a rebuilt Colossus machine developed by the codebreakers. Bletchley receives hundreds of thousands of visitors each year.