Wannsee – Meeting of senior Nazi officials held in Wannsee, Berlin, to implement the Final Solution (Jews and others deported to camps and murdered) 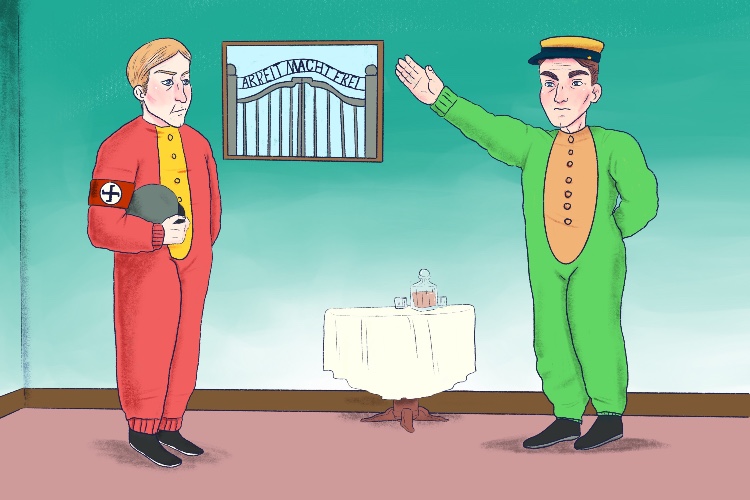 A onesie (Wannsee) was worn by all the Nazi officers as they discussed the implementation of the Final Solution.

NOTE: We must apologise for being so flippant about such an emotive issue but it is vital that these issues are remembered. If Reinhard Heydrich and his cohorts standing in their onesies is how you remember an important fact about the holocaust, then Mammoth Memory has done her job.

In July 1941, Hermann Göring, Hiter's deputy, ordered Reinhard Heydrich, SS leader and Gestapo chief, to prepare a plan for the “final solution” to what the Nazis called "the Jewish question".

Six months later, on January 20 1942, the Wannsee Conference – so-called because it was held in a suburb of Berlin called Wannsee – was held to discuss Heydrich's plan. It was attended by fifteen senior Nazi bureaucrats led by Heydrich, including Adolf Eichmann, chief of Jewish affairs for the Reich Central Security Office.

The conference marked a turning point in the Nazi's policy towards Jewish people. An earlier plan to deport all Europe's Jews to the African island of Madagascar was dropped. The new plan was to round up all Jews throughout Europe, transport them eastwards and place them in labour gangs. The work and living conditions would be sufficiently hard as to ensure the elimination of large numbers through “natural diminution”; those that survived would be “treated accordingly”.

Those present understood that “evacuation to the east” was a euphemism for concentration camps. They also knew that the “final solution” was to be the systematic murder of Europe’s Jews, which is now known as the Holocaust.

Interesting fact: The final protocol of the Wannsee Conference did not actually mention extermination but, within a few months of the meeting, the Nazis installed the first gas chambers in Poland.