Battle of Arnhem – The last bridge, but a bridge too far. Many Allied soldiers died trying to hold the bridge but failed after four days 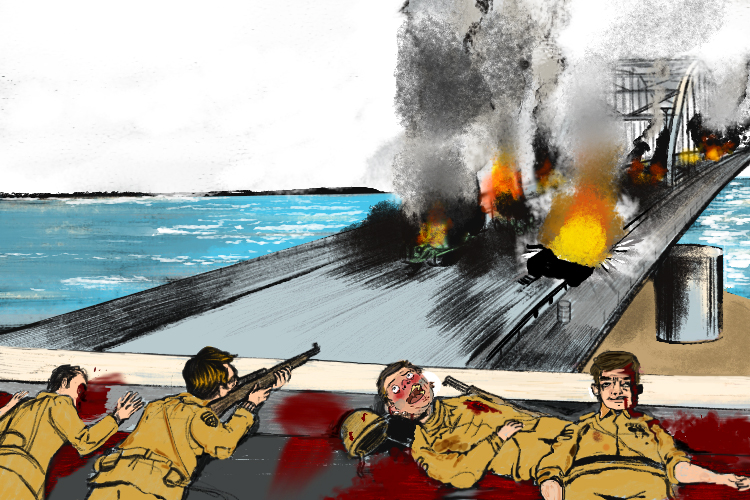 A lot of harm came to them (Arnhem) as they tried to hold the last bridge.

In September 1944, a few months after the Allies landed in Normandy, German forces were rapidly retreating from France.

British Field Marshal Bernard Montgomery had an audacious plan to dive behind enemy lines into the heart of industrial Germany. Success depended on American and British paratroops capturing and holding vital bridges over the Rhine until relieved by reinforcements.

The ultimate key to success rested on the British First Airborne Division at Arnhem bridge. . . but it proved a bridge too far.

The Battle of Arnhem was part of Operation Market Garden, which involved the taking of several other strategic Rhine bridges. It was the biggest airborne military operation in history.

A few hundred British pathfinders reached Arnhem bridge and secured its northern end, but by the following morning the operation was in trouble. German counter-attacks cut 1st Airborne Division troops off from the landing zones and radio communication was disrupted. Bad weather delayed the arrival of vital airborne reinforcements and further ground forces heading for Arnhem were making very slow progress.

Before backup forces could get there, the bridge was lost and surviving Allied troops had retreated. Arnhem had proved to be "a bridge too far". Operation Market Garden failed and the Allies would not cross the Rhine again until the spring of 1945.

Interesting fact: Although the airborne landings initially went well, Allied intelligence failed to heed reports from the Dutch underground that a German panzer corps was camped nearby. The Second Parachute Battalion was the only First Airborne unit to reach the key Arnhem bridge – the remainder of the division was pinned down by the panzer corps in and around Arnhem.