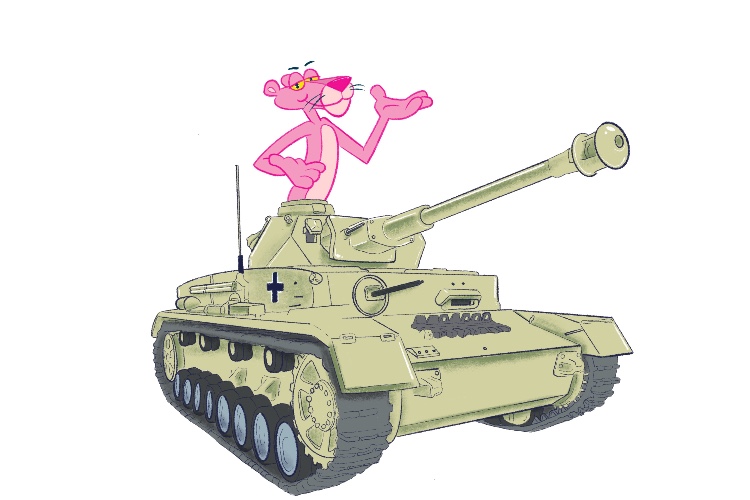 The Pink Panther (Panzer) was driving the tank.

The Panzer series of military battle tanks was fielded by the German army in the 1930s and '40s.

There were six tanks in the series – Pz.I to Pz.VI – and they represented practically all of Germany's tank production from 1934 until the end of World War II in 1945.

After World War I, Germany was prohibited from using tanks by the Treaty of Versailles. However, after Adolf Hitler rose to power in 1933, the German army started to rebuild its tank forces – known as Panzer Divisions. To begin with, they were built secretly, and then openly from 1938.

This gave the German's an advantage at the start of World War II – they had new, more effective tanks while Britain, France and the Soviet Union were initially hampered by less effective tank technology.

However, with the development of better British tanks and the entry of the United States into the war with their Sherman tanks, the German Panzers lost many of their advantages.

Interesting fact: The last Panzer tanks to be built – the Pz.VIs, known as the Tiger I and Tiger II – had 100mm thick frontal armour. The Tiger I weighed 55 tons and the Tiger II 70 tons, making the latter the heaviest tank of World War II. Their top road speed was 24 miles per hour.