Operation Market Garden – A failed attempt to take Rhine bridges and penetrate Germany. The attack on the bridge at Arnhem failed – it was a bridge too far . . . 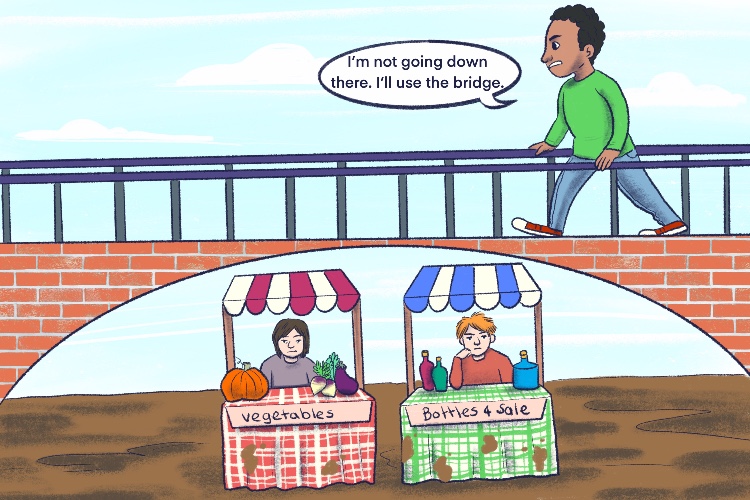 The market in the garden was a failure. There was mud everywhere. People just used the bridge over the market. That way they believed the mud wouldn't harm them (bridge at Arnhem).

Operation Market Garden was a daring airborne operation to secure crossings over the River Rhine in the Netherlands and advance into Northern Germany in September 1944. It took place just over three months after the D-Day landings in Normandy.

It was the idea of Britain's Field Marshal Montgomery, who hoped it would shorten the war. The plan was for the seizure of key bridges near the Netherlands/German border by the 101st and 82nd US Airborne Divisions and the 1st British Airborne Division, who would land by parachute and glider.

The bridges were at Eindhoven, Nijmegen and Arnhem, with two smaller ones at Veghel and Grave.

Had it been successful, the operation would have liberated the Netherlands from German occupation, outflanked Germany's formidable frontier defence known as the Siegfried Line, and made possible an armoured drive into the Ruhr, Germany's industrial heartland.

The Allied airborne divisions landed on September 17 1944. Although bridges were captured, the plan failed mainly because of 30 Corps' inability to reach the furthest bridge at Arnhem before German forces overwhelmed the few British troops already there. The Allies' intelligence had failed to detect the presence of German tanks, including elements of two SS Panzer divisions.

There were communication failures because Arnhem's wooded landscape restricted the range of wireless sets, and thick fog in England combined with low cloud over the battle zone hampered resupply and the sending of reinforcements.

On September 24th and 25th around 2,100 troops from the 1st Airborne Division were ferried back across the Rhine. Another 7,500 were either dead or had become prisoners of war.

The crossing of the Rhine and the capture of the Ruhr were delayed for six months. There would be no sudden victory – the Allies had to fight their way into Germany on a broad front.

Interesting fact: The "bridge too far" at Arnhem still stands today. It was renamed the John Frost Bridge in honour of Major-General John Dutton Frost, commander of the British airborne forces who reached and defended the bridge during Operation Market Garden. Frost was wounded by shrapnel and taken prisoner by the Germans, who provided hospital treatment. He remained in the army for many years after the war and died in 1993 at the age of 80.