Rupert – A paradummy used as a deception, causing the enemy to shift focus 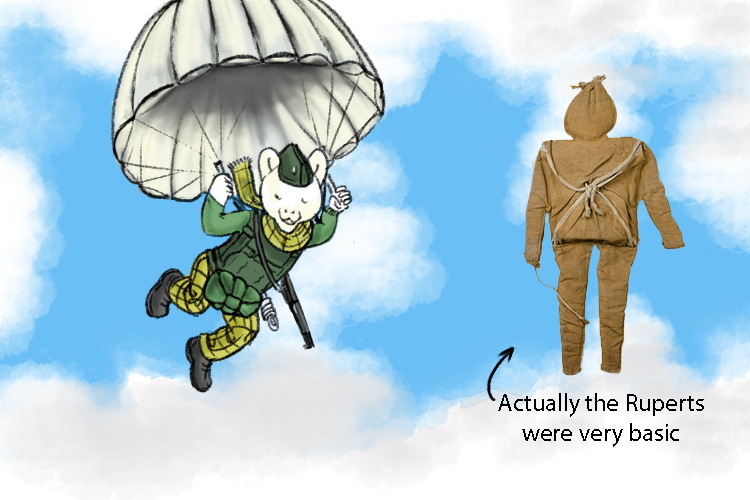 Rupert the bear (Rupert) was dropped in France on D-Day.

Paradummies – called "Ruperts" by British troops and "Oscars" by the Americans – were used as decoys during the D-Day Landings of World War II.

The idea was to deceive the Germans into thinking that a large force was parachuting in, drawing their troops away from the real landing zones.

The fake parachutists were constructed from hessian cloth, filled with sand and straw and arranged to resemble human figures.

The ploy was known as "Operation Titanic", which took place during the night/early morning of June 5 and 6, 1944.

Five-hundred fake cloth dolls, each attached to a parachute, were dropped in four locations, miles away from the real Allied parachutists' drop zones.

Coordinated by the RAF and the Special Air Service, the operation involved 40 aircraft responsible for dropping the Ruperts, rifle simulators and SAS men.

The SAS troops landed with the dummies and played recordings of battle noises to make the decoy even more realistic.

The crude dummies were equipped with explosive charges that would set the cloth on fire, preventing the Germans discovering that they were a deception. It was hoped this would suggest that that the parachutists had burnt their 'chutes and lay hidden, ready for action.

Interesting fact: Using "Ruperts" was not an original idea. Similar dummies had been used by the Germans during battles in the Netherlands four years earlier.