Tobruk – City in Libya, North Africa. It changed hands between the Axis and Allies twice. When Rommel beat the Allies it was a great blow 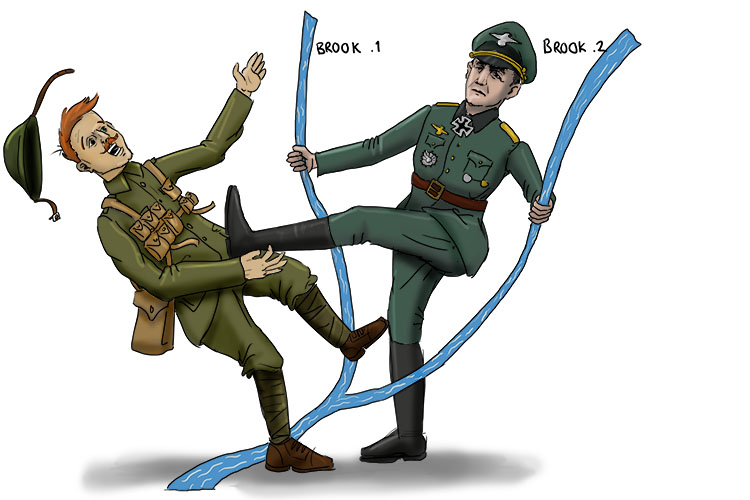 When the two brooks (Tobruk) came together Rommel pushed back the allies.

Tobruk – a strategically important port on the Mediterranean coast of Libya in North Africa – was the scene of some of the most prolonged fighting in World War II, and changed hands several times.

In January 1941, the Allies took Tobruk by defeating the Italian 10th Army during Operation Compass.

Soon afterwards, much of the Allies' Western Desert Force was sent to fight in campaigns in Greece and Syria. As German and Italian reinforcements arrived in Libya, the Allies maintained only a skeleton force in the country, including Tobruk.

The Axis forces' Operation Sonnenblume (from February 6 to May 25, 1941) forced most of the Allies remaining in Libya to retreat to the Egyptian border. A garrison, comprising mostly the 9th Australian Division, remained at Tobruk. Repeated attacks on them by "Desert Fox" Erwin Rommel's forces amounted to a siege of the city for 241 days.

The garrison force, buoyed by a spirit of "there'll be no Dunkirk here", repulsed many attacks by the Germans and Italians.

Rommel's failure to seize the stronghold was the Wehrmacht's first major reverse of World War II. Rommel was ordered by Berlin to end the attacks, hold his position and conserve his forces.

The siege of Tobruk was lifted in December 1941 with the success of the Allies' Operation Crusader offensive.

However, fortunes changed again. In June 1942, Rommel pressed forward again, and the troops trying to hold Tobruk suffered one of the worst defeats of the war. Tobruk and its garrison of around 34,000 men surrendered to Rommel's German-Italian force.

Tobruk remained in German hands until it was retaken during the Allies' advance following the second battle of El-Alamein in October-November 1942. This was one of the major turning points of World War II.

Interesting fact: Although Rommel's lengthy initial campaign to take Tobruk from the Allies was called a "siege", the Axis forces were unable to completely surround the city. Because the British Royal Navy controlled the Mediterranean Sea, warships were able to bring in fresh supplies and evacuate the wounded; occasionally, they even provided gunfire support.