Enola Gay – The B-29 bomber that was used by the United States to drop an atomic bomb on Hiroshima, Japan. It was named after the pilot's mother 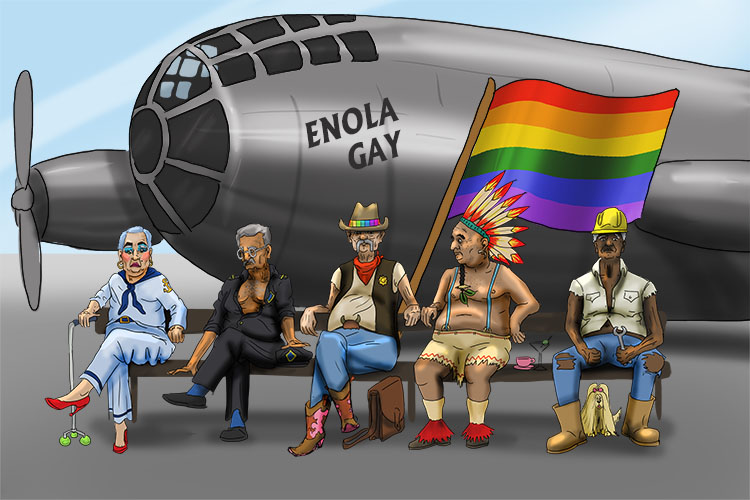 All the engineers were old and gay (Enola Gay) who worked on the Enola Gay bomber plane.

The B-29 bomber, Enola Gay, was named after the mother of pilot Paul Warfield Tibbets, Jr.

Lieutenant Colonel Tibbets flew the plane to Hiroshima where its deadly payload, an atomic bomb called Little Boy, was dropped from the plane and exploded over the city on August 6, 1945.

Enola Gay was a four-engine heavy bomber that had undergone a number of modifications, including reinforcements to its bomb bay.

Tibbets instructed a maintenance man to paint the name "Enola Gay" on the aircraft's nose shortly before take-off on the Hiroshima mission.

Enola Gay remained in service until it was donated to the Smithsonian Institution in 1949. Later, it was disassembled and stored. Work on restoring it – a project which spanned nearly twenty years – began in 1984. In 2003, the fully restored Enola Gay went on display at the National Air and Space Museum's Steven F. Udvar-Hazy Center in Chantilly, Virginia.

Interesting fact: Enola Gay also took part in the second atomic attack on Japan: it was used as the weather reconnaissance aircraft for the original target of Kokura. Clouds and drifting smoke resulted in the secondary target, Nagasaki, being bombed instead.