The Third Reich – Hitler said that this was the "Third Empire" of the German people, between 1933 and 1945

The third door on the right (Third Reich) led to... 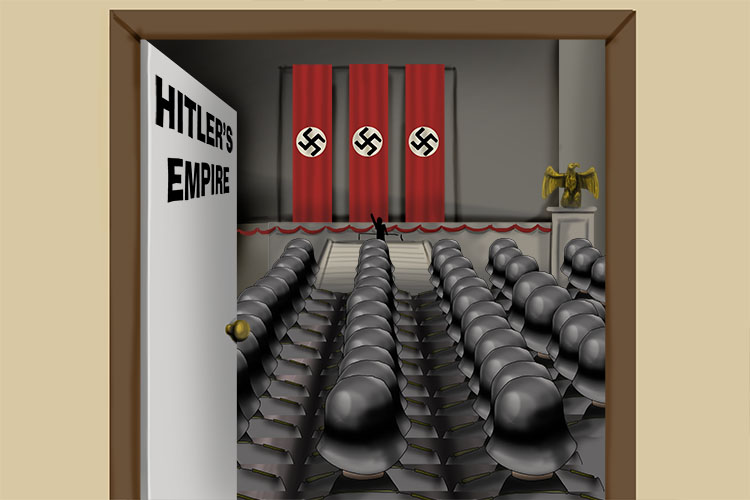 The Third Reich was the official Nazi name for the authoritarian government that existed in Germany from January 1933 to May 1945.

It was the successor of the German Empire of 1871 to 1918 (known as the Second Reich), which itself succeeded the medieval and modern Holy Roman Empire of 800 to 1806 (the First Reich).

The Nazis' rise to power bought to an end the Weimar Republic, a parliamentary democracy established after World War 1.

The Nazi state soon became a regime and the German people no longer had any guaranteed basic rights.

Following a suspicious fire in the Reichstag (the German parliament) in February 1933, the new Nazi government issued a decree which ended constitutional civil rights and created a state of emergency. From then on, official decrees could be enacted by Hitler without the agreement of parliament.

The Nazis used extensive propaganda (biased, and often misleading, information) to spread the Third Reich's ideals and goals. When the German President, Paul von Hindenburg, died in August 1934, Hitler assumed presidential powers, in addition to his existing role of Chancellor (equivalent to a prime minister).

Hitler now stood outside the legal state and determined policies himself. Those Third Reich policies included a role for "racially pure" women to bear as many "Aryan" children as possible; the elimination of people Hitler believed were racially impure, such as Jews and Gypsies; and the taking of land in Eastern Europe and the Soviet Union to provide more living space (Lebensraum) for the "racially superior" German population.

Any criticism of the regime was suppressed by the Gestapo (the secret police) and the Security Service (SD) of the Nazi Party.

Hitler's invasion of other European countries led directly to World War II. The War lasted six years and it is estimated it killed 60 million people, 40 million of whom were civilians. Ultimately, the Third Reich failed militarily, largely due to the Nazis fighting on too many fronts at the same time and the steely determination of the Allied forces.

After the war, Germany was initially divided into four zones, under the control of the USA, Britain, France and the Soviet Union respectively.

A new Federal Republic of Germany (West Germany), with Bonn as its capital, was eventually set up on September 21, 1949. This was followed by the establishment of the German Democratic Republic (East Germany) with East Berlin as its capital a week later. The word "Reich" was not included in Government names again.

Interesting fact: Germany remained divided into East and West until 1990. Following the collapse of the communist system in Eastern Europe, East and West Germany were reunified under a single government with Berlin as its capital.