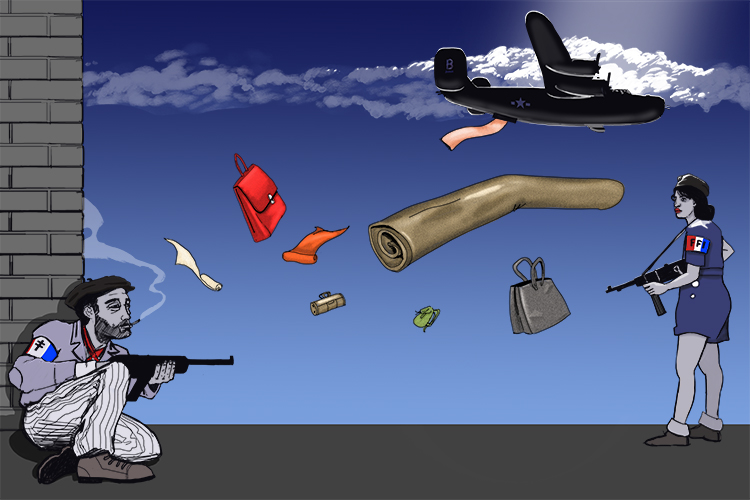 Dropping carpets and bags (Operation Carpetbagger) out of planes to French resistance fighters.

Operation Carpetbagger was a series of secret, high-risk missions to drop weapons, supplies and agents behind enemy lines – and sometimes bring people back – during World War II.

Missions from the UK fell into two periods.

The Maquis (resistance fighters) of Haute Savoie, a region in the Alps of eastern France, and other mountainous areas were supplied from the Mediterranean war theatre until after the Normandy Landings, when large numbers of US Eighth Air Force bombers were diverted from strategic missions to make a series of mass drops.

Missions to Poland were mostly carried out by RAF and Polish aircraft.

The first period of Carpetbagger missions ended in September 1944. By this time, successful sorties had delivered to occupied Europe 662 agents, 18,535 containers of supplies, 8050 “Nickles” (bundles of 4,000 propaganda leaflets), 10,725 packages of supplies, and 26 pigeons (for messages, not eating).

After a lull of about three months, there was further small-scale activity until the last two months of the war. This second period included an increase in the number of sorties flown to Denmark and Norway, which had previously received small quantities of supplies compared with those dropped in France.

Secrecy was vital: the only flight crew members who knew the destinations were the pilot and the navigator; there was strict radio silence once a mission plane was in the air; and crews did not know what they were dropping, or the identity of any agents they were transporting.

Interesting fact: The U.S. B-24 Liberator aircraft used in many Carpetbagger missions were painted glossy black – the best colour for evading searchlights.