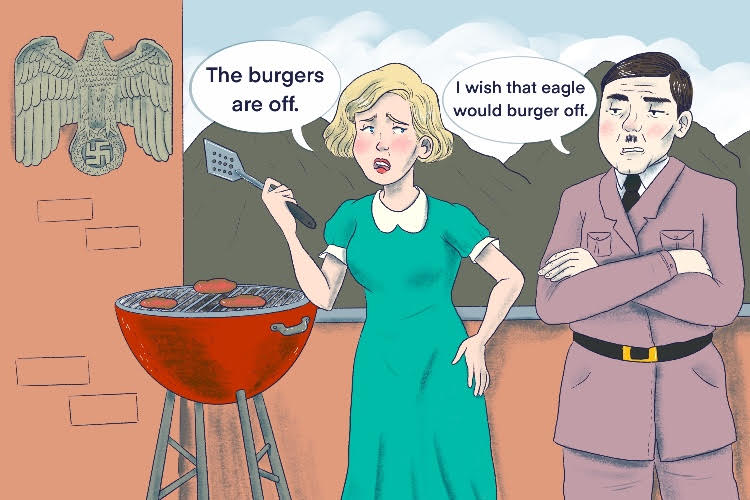 "The burger is off," (Berghof) said Eva Braun. "And that eagle better burger off" (Eagle's Nest) replied Hitler. The eagle had flown down from high up on the mountain.

The Berghof was Adolf Hitler's home in the Bavarian Alps near the town of Berchtesgaden, next to Germany's border with Austria.

Hitler spent much of his time at the Berghof during World War II.

The property was built around 1916 as a small holiday chalet. Hitler bought it in 1931 with funds he received from the sale of his book, Mein Kampf (My Struggle). He had it refurbished and much extended by the architect Alois Degano during 1935–36.

After the transformation, the Berghof represented the height of luxury for the time. Lavish touches included a huge picture window that could be lowered into the wall to give a sweeping, open-air view of the snow-capped mountains of Austria; a dining room panelled with very expensive cembra pinewood; and a great hall with a very large red marble fireplace.

A big complex of homes for the Nazi leadership, with a landing strip and buildings for security and support staff, was constructed nearby. Many neighbours were compelled to sell their properties and leave so that the land could be used for the new buildings. A meeting house, called the Kehlsteinhaus and nicknamed Eagle's Nest, was built in 1937–38 on the mountaintop above the Berghof. Many of the leading Nazis held meetings in the Eagle's Nest, but Hitler rarely went into it.

Towards the end of World War II, raids in the area by British Lancaster bombers damaged many of the buildings in the complex. When Allied ground forces closed in, members of the German SS set fire to the Berghof and withdrew. By this time, Hitler and his wife of one day, Eva Braun, had already committed suicide in the Berlin bunker.

Interesting fact: British Prime Minister Neville Chamberlain met with Hitler at the Berghof in 1938 – the year before the war began – during negotiations that led to the signing of the Munich agreement that handed part of Czechoslovakia to Germany.