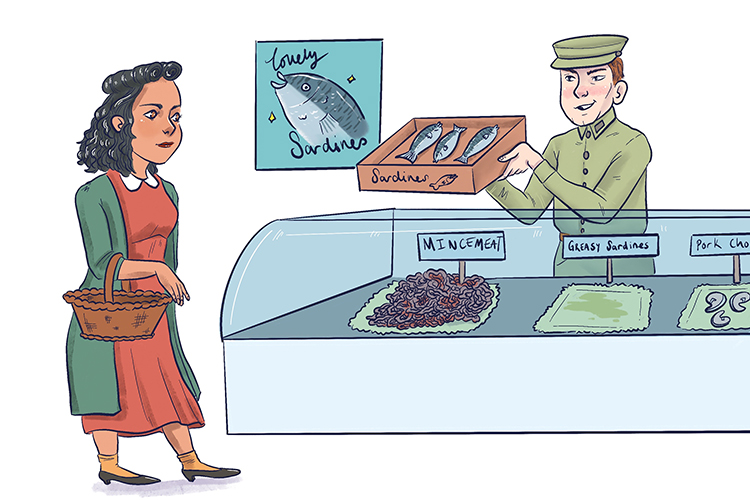 "Can I have some mincemeat?" (Operation Mincemeat) she said, but the British Army Officer said: "Sister, don't be silly (not Sicily), what you need is greasy sardines." (Greece and Sardinia instead)

The body of a tramp found dead in an abandoned London warehouse helped to alter the course of World War II.

The body was the centrepiece of Operation Mincemeat, through which the British fooled Hitler into thinking the Allies were planning a massive operation in Greece and Sardinia when, in reality, they were preparing for an attack on Sicily.

Glyndwr Michael, the tramp, ended his own life in 1943 by taking rat poison. A coroner who looked into his death said the body was to be "removed out of England" for burial. The coroner was actually in on the plan by British agents to make use of a body with no visible injuries. He falsified documents to suggest Michael's family had agreed to the body being used.

After three months on ice in Hackney mortuary, the body was taken by submarine to the southern coast of Spain. The corpse had been transformed into a high-ranking soldier – the fictitious Major William Martin. As part of a plausible back story, ticket stubs, mementos from a fiance and an identity card were placed in his pockets.

A briefcase containing a letter marked "PERSONAL AND MOST SECRET" was chained to his wrist. The letter identified Greece and Sardinia as the places chosen for invasion by the Allies.

The body was found floating near the Spanish port of Huelva, on the Atlantic coast of south-western Spain. It was assumed to be a British military courier who had died in a plane crash.

Spain had been chosen for the body drop because, while appearing to be neutral, the country was teeming with Nazi spies.

Photos of the falsified documents turned up on Hitler's desk a week or so later. He was fooled and relocated a complete panzer division – about 90,000 soldiers – to Greece.

Churchill received a message from his War Office team: "Mincemeat swallowed, hook, line and sinker" (an expression that means someone completely believes what they've been told).

In early July 1943, the Allies attacked Sicily and took the island with a fraction of the casualties and ship losses originally feared. As the Allied forces continued on to the mainland, Italian leader Benito Mussolini was toppled from power.

Hitler was forced to confront the Allied invasion coming from the South and called off a huge offensive against the Soviet Union. The advancing Red Army of the Soviet Union did not stop until it reached Berlin.

The tide of the war turned thanks, in part, to the tragedy of a tramp who ended his own life.

Interesting fact: Operation Mincemeat was the idea of Ian Fleming, who went on to write the famous James Bond spy novels. Fleming was a Lieutenant Commander in the Naval Intelligence Division.