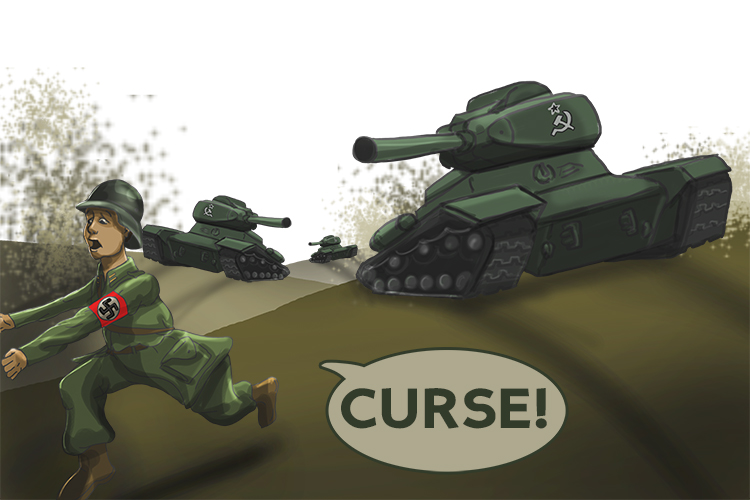 "Curse (Kursk). We can't get through these tanks."

The Battle of Kursk took place in July and August 1943 around the Soviet city of Kursk in western Russia.

It was part of Operation Citadel, the Germans' final effort to regain dominance on the Eastern Front following huge losses in the Battle of Stalingrad and other major engagements.

Germany's original invasion of the Soviet Union had created a salient – an outward bend in a battle line where troops have advanced – known as the Kursk Bulge because Kursk lay at its centre.

However, delays to the blitzkrieg (shock campaign, or lightning war) offensive allowed the Soviets plenty of time to prepare for the battle. The Red Army dug in and amassed its own formidable arsenal of around 1,300,000 men, more than 20,000 guns and mortars, 3,600 tanks, 2,650 aircraft, five reserve field armies of another 500,000 men and 1,500 additional tanks.

Hitler was determined to move forward despite warnings from some of his senior strategists that the operation should be abandoned because of the Red Army's huge fortifications. However, he did delay the operation, waiting for better weather conditions and delivery of some new, state-of-the-art tanks.

Blitzkriegs depend on the element of surprise, but by the time Hitler gave the go-ahead, the Germans had lost that advantage.

Before the Germans could strike, the Soviet troops unleashed a bombardment. The Germans then made their own assault on the northern and southern parts of the Kursk Bulge salient, followed by infantry strikes supported by aircraft.

The Red Army prevented German tanks from making headway in the North of the Kursk Bulge. In the south of the Bulge, despite huge losses, the Soviets prevented the Germans from capturing Prokhorovka, 50 miles southeast of Kursk. It was here that Russia's 5th Guards Tank Army clashed with the tanks and artillery guns of Germany's II SS-Panzer Corps. It was the Soviets' success here that effectively ended the German offensive.

Interesting fact: The battle around Prokhorovka has often been described as the biggest tank battle in history, but Russian military historians with access to recently-opened archives claim the title belongs to another World War II confrontation, the Battle of Brody, which took place in 1941. This battle was also between the Germans and the Soviets, but on this occasion, the Germans were the victors.