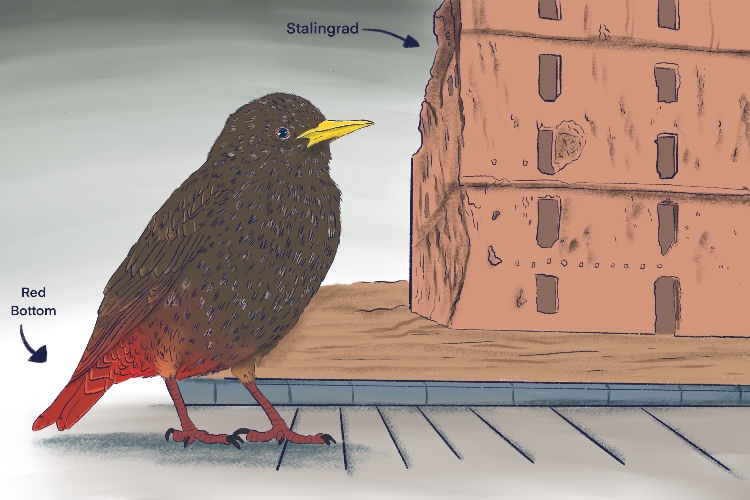 The starling had (Stalingrad) a red (soviet) bottom (Operation Uranus).

The Battle of Stalingrad took place from 23 August 1942 to 2 February 1943. Germany and some other Axis forces fought the Soviet Union for control of the city of Stalingrad (which is now called Volgograd) in the south of Russia.

It was the biggest confrontation in the history of warfare, involving nearly 2.2 million personnel. It was also the bloodiest battle ever – somewhere between 1.8 million and 2 million were killed, wounded or captured.

The German troops involved were the 6th Army and parts of the 4th Panzer (tank) Army, supported by the German air force, the Luftwaffe, whose bombing raids reduced much of the city to rubble.

On 19 November 1942, the Soviets launched Operation Uranus, a two-pronged attack hitting the weaker Romanian and Hungarian armies that were protecting the German 6th Army's flanks (sides and rear). The result was that the 6th Army was surrounded and cut off.

Germany tried to supply the surrounded troops by air, and to break the encirclement from the outside, but they were unsuccessful. At the start of February 1943, the Axis forces had exhausted their ammunition and supplies. After five months, one week and three days of battle, the remaining units of the 6th Army surrendered.

The defeat for the Germans marked the turning of the tide of war in favour of the Allies.

Interesting fact: The Soviet leader, Joseph Stalin, refused to evacuate the civilian population of Stalingrad during the battle; around 400,000 of them were trapped for the duration. The exact number of civilians who died is not known, but some accounts say the majority perished.