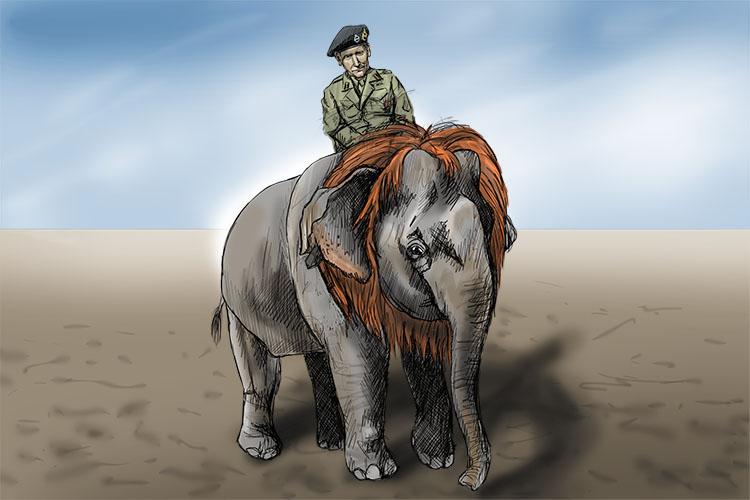 The elephant with a mane (El Alamein) was ridden by General Montgomery after the Allies' victory. (Note: not really, but it is memorable).

There were actually TWO battles of El Alamein during the North African campaign of World War II. It is the second battle, which resulted in victory for the Allies, that is best remembered.

The first battle took place from July 1 to 27, 1942. After the British had defeated Italian forces in a number of battles in North Africa, German General Erwin Rommel became commander of Axis forces in the region. In January 1942 Rommel began a new drive eastwards from Libya with the objective of taking control of Egypt's Suez Canal, which served as a vital shipping link (and still does).

German and Italian troops reached the British defences at El Alamein – 240 kilometres (149 miles) north-west of Cairo, Egypt – on June 30, 1942. The battle began the next day, but ended in a stalemate.

After this first battle, the British Commander who had been in charge was sacked, and then his replacement was killed. Eventually, General (later Field Marshal) Bernard Montgomery (known as "Monty") took command of the British Eighth Army in North Africa. Montgomery prepared carefully for a new offensive – the Second Battle of El Alamein – building up a sizeable army.

By mid-October 1942, Montgomery was able to deploy nearly double the number of men and tanks available to the German-Italian side. The Allied troops also had superior air support.

Montgomery's plan was for a diversionary attack to the south led by Free French troops, with the main attack coming in the northern sector closer to the coast.

Although the German-Italian forces were surprised at the violence of the Allies' attack on the night of October 23-24 1942, the Eighth Army's progress was slower than expected and Rommel mounted a number of counterattacks.

For a time, it seemed the British offensive might be brought to a halt. However, progress by the Allies' infantry (ground troops) – particularly the Australian and New Zealand divisions – made corridors through the German-Italian defences which the British then exploited. On November 2, Rommel sent a message to Hitler saying the battle was lost. Rommel was initially denied permission to retreat but he did so anyway, leaving the Italians, who lacked motor transport, to be dealt with by the British, who had won a great victory.

After the second battle of El Alamein, the expulsion of Axis forces from North Africa was just a question of time.

Interesting fact: British Prime Minister Winston Churchill, speaking of the Allies' victory in the second battle, said: "Now this is not the end, it is not even the beginning of the end. But it is, perhaps, the end of the beginning."