Little Boy – The atomic bomb dropped on the Japanese city of Hiroshima on August 6, 1945 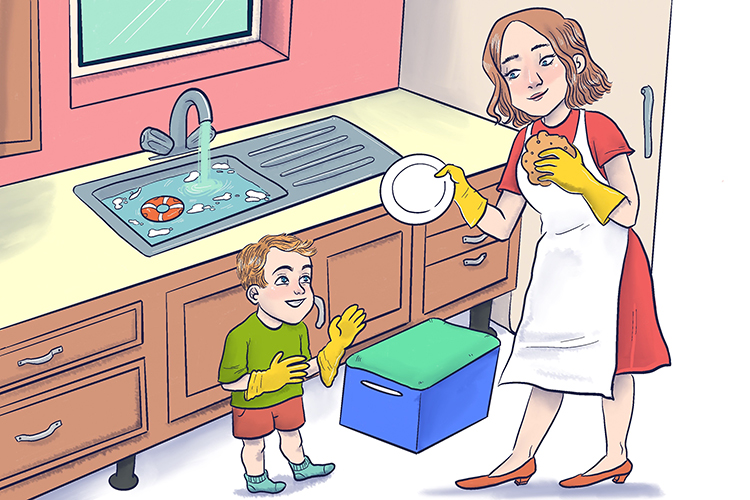 "Come here and help wash with ma" (Hiroshima). Strangely, in the washing up bowl was a little lifebuoy (Little Boy).

Detonated over Hiroshima on August 6, 1945, Little Boy was the first atomic bomb to be used in a war.

Little Boy was a nuclear fission weapon. Its explosive force was provided by uranium-235, a natural element.

The bomb was created by America's Manhattan Project, which started in 1942 and continued beyond the end of World War II.

Little Boy was dropped from an American B-29 bomber named Enola Gay. It killed an estimated 80,000 people instantly, with tens of thousands dying later from the effects of the bomb.

Little Boy was 10ft (3m) long, 28 inches (71 cm) in diameter and weighed approximately 9,700 pounds (4,400 kg). The design used a "gun" method to explosively force a hollow cylinder of uranium-235 and a solid target cylinder together into a super-critical mass, initiating a nuclear chain reaction.

The explosion's first effect was blinding light, together with radiant heat from the fireball.

Near ground zero, everything flammable burst into flames. Fires were started throughout the blast-damaged area by fireball heat and overturned stoves and furnaces, electrical shorts and so on. The fires merged into a firestorm about 3.2 kilometres (2 miles) in diameter. This firestorm sucked in surface air from all directions to feed an inferno which destroyed everything flammable.

Interesting fact: The components of Little Boy were made at three different plants in the U.S. so that no one working on the bomb would have a copy of the complete design.