Battle of the Bulge – The last German offensive campaign on the western front, launched through the Ardennes forest 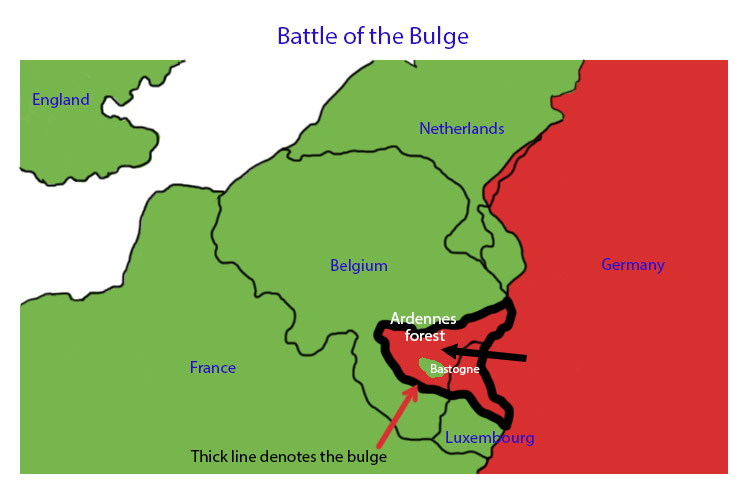 Exactly as it says, it was a bulge as the Germans pushed hard through a dense (Ardennes) forest.

After their famous D-Day invasion of Normandy in June 1944, Allied troops advanced across France and into Belgium. By autumn, however, their progress slowed. The Germans' defence was being strengthened with reserves and newly introduced forces from the Volkssturm (home guard).

Allied Supreme Commander Dwight D. Eisenhower had troops distributed along a 600 mile (1,000km) front stretching from the North Sea to Switzerland. The Germans were determined to launch a counter-offensive.

That counter-offensive was the Battle of the Bulge, which took place in the hilly, forested countryside of the Ardennes in south-eastern Belgium, on the border with Germany, from December 16, 1944, to January 25, 1945.

It was the biggest and bloodiest single battle fought on the Western Front of World War II, and the last major German offensive of the war on that front.

The name "Battle of the Bulge" derived from the shape in the front that resulted from the Germans' push into the Ardennes area – on a map, it looked distinctly like a bulge.

The Germans chose the Ardennes as the site of their offensive because it was regarded as "difficult" country and therefore an attack at that position would be unexpected. They were right – the offensive caught the Allies by surprise. The Germans also chose to strike when the weather provided them with a natural cloak – mist and rain kept aircraft on the ground for the first three days of the battle, so there was initially no air support for the Allied troops.

The German's made progress in the opening days of the battle, but between January 8 and 16, the Allied armies concentrated their strength and the Germans began to withdraw.

The Allies suffered about 75,000 casualties while Germany lost 120,000 men and a large amount of equipment they could ill afford to replace.

Even though the Battle of the Bulge failed to meet German objectives, it inflicted a huge amount of damage on the Allies and upset their immediate plans. On the other hand, it made clear to German troops that they were no longer able to maintain prolonged resistance to the overall Allied offensive.

Interesting fact: The German offensive at the Battle of the Bulge was hampered by a shortage of fuel. By late 1944 the German war machine was under strain and there were problems sourcing fuel. Although they set aside five million gallons for the battle, poor road conditions and logistical errors meant much of the fuel failed to reach those who most needed it. German infantry divisions resorted to using around 50,000 horses for transport in the Ardennes.