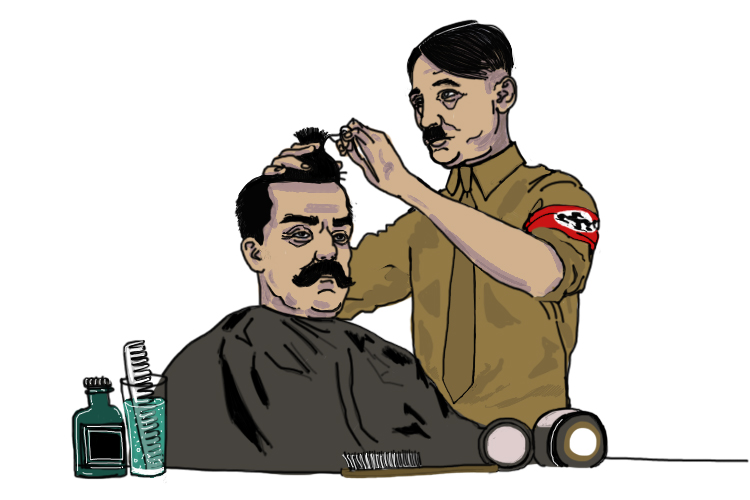 The barber rose up (Barbarossa) in Germany and said: "We are going to give the Soviet Union a haircut!"

Operation Barbarossa was the German invasion of the Soviet Union which began on June 22, 1941.

It was the ultimate failure of this operation that brought a significant turning point in World War II.

Hitler's original plan for the invasion was set back by five weeks because of the unforeseen necessity to invade Yugoslavia and Greece in April 1941. This delay, combined with the earlier than usual onset of the Russian winter, was a major factor in the Germans' defeat by the Soviets.

Leading Nazi military strategists were convinced that the Red Army could be defeated in just two or three months.

The Germans allocated nearly 150 divisions containing a total of around three million men to the Soviet campaign.

However, although the Germans shattered the original Soviet armies by superior technique, they found their path blocked by fresh Soviet forces. Hitler's advisers had seriously underestimated the number of reserve troops that the Soviet leader, Joseph Stalin, could bring from the depths of the vast USSR.

Another miscalculation the Germans made was in their belief that the Soviet regime would collapse from lack of domestic support within three to six months of the invasion.

Hitler's Operation Barbarossa began to flounder in August 1941, and its fate was sealed when the Soviet counter-offensive began in earnest.

The German troops were tired and the battlefields became mudbaths as the weather deteriorated and winter set in. Temperatures then fell to sub-zero in one of the most severe winters in decades. Frostbite decimated the German troops, who lacked appropriate clothing for the conditions. The penetrating cold also paralysed the Germans' mechanised transport, including tanks, artillery and aircraft.

By contrast, the Soviets were well clad and could operate more effectively in winter than the Germans, whose casualties mounted hugely.

By November, the Germans had suffered about 730,000 casualties.

The Red Army suffered greater losses than the Germans, but the inability of German forces to defeat the Soviet Union marked a significant setback for the Nazi war effort.