Wehrmacht – The combined name of the Heer (army), the Kreigsmarine (navy) and the Luftwaffe (airforce); the combined German forces 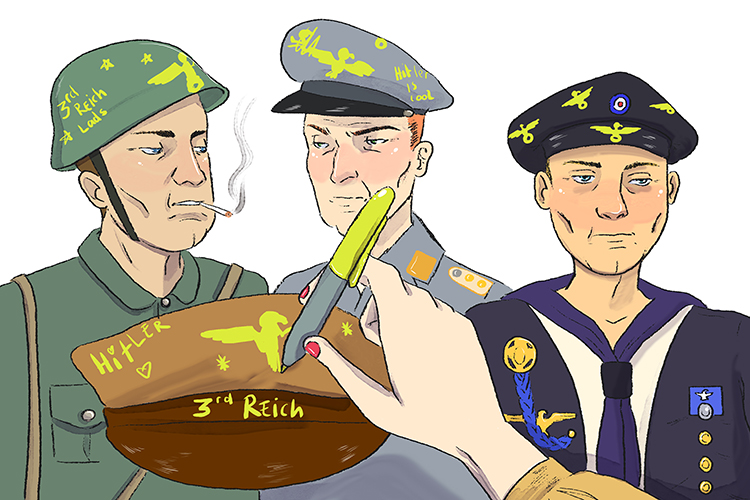 The Germans were marker (Wehrmacht) crazy: they drew an eagle on all their uniforms.

The Wehrmacht consisted of Germany’s Heer (army), Kriegsmarine (navy) and Luftwaffe (air force) – in other words, it was the collective name for Germany’s armed forces under the Nazis.

Before the rise of the Nazis, Wehrmacht was a name used in Germany to describe the armed forces of any country. For instance, Britische Wehrmacht would have been the term for British armed forces.

The literal translation of Wehrmacht is “defence force”, made up of “wehr”, which means “defence”, and “macht”, meaning “power” or “force”.

The Oberkommando der Wehrmacht (Wehrmacht High Command, known as the OKW) was created to exercise command and control over the three branches of the Wehrmacht – army, navy and air force, each of which also had its own high command.

By the end of World War II, more than 17 million troops had served in the Wehrmacht. The army accounted for the overwhelming majority of that total (13 million), followed by the air force (3 million) and the navy (1.5 million).

In addition, as many as 1 million men had served in the Waffen-SS – the “political” soldiers of the Nazi Party who technically also came under OKW control.

The victorious Allies formally disbanded the Wehrmacht on August 20, 1946.

There was an effort to distance the Wehrmacht from the crimes of the Nazi regime. The “clean Wehrmacht” narrative held that the typical Wehrmacht soldier, airman, or sailor was no different than his counterpart in the Allied forces.

Interesting fact: The “clean Wehrmacht” myth was dispelled with the publication of a book by Wolfram Wette called The Wehrmacht: History, Myth, Reality in 2002. The book detailed how Wehrmacht commanders were not dragged unwillingly into Hitler’s racist agenda but were fully complicit with it.