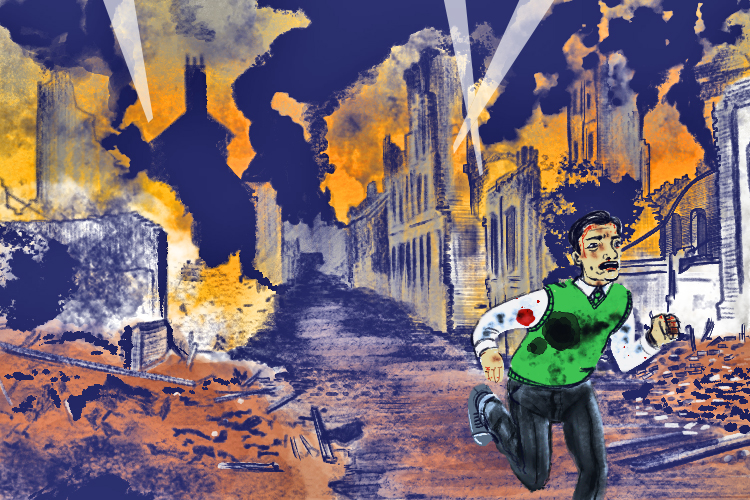 A blizzard of bits (blitz) is the aftermath of Germany's bombing campaign.

A daylight bombing raid on London on September 7, 1940, was the start of a German offensive against Britain that became known as the Blitz.

Daylight raids soon gave way to night attacks, which were difficult to counter. It was not just London that suffered enormous destruction – the Germans extended their scope to other British cities.

The Blitz followed the failure of the German air force – the Luftwaffe – to defeat Britain's Royal Air Force in the Battle of Britain. Although the bombing raids caused enormous destruction and loss of life – around 43,000 British civilians were killed and another 139,000 wounded – they actually had little effect on Britain's ability to continue fighting.

The British did not have sufficient anti-aircraft artillery and searchlights, or night fighters that could find and shoot down enemy aircraft in the dark. London was bombed by the Luftwaffe for 76 consecutive nights.

During November 1940, the Germans extended their offensive to provincial cities. The effect on Coventry was particularly severe, and it came to be seen as a symbol of modern warfare.

At the start of 1941, the German navy persuaded Hitler to concentrate attacks on Britain's maritime resources. In 46 raids between February and May, ports were pounded heavily, but they all still managed to function. Among them were Plymouth, Bristol, Swansea, Liverpool, Belfast, Clydeside, Newcastle and Hull.

In the early stages of the Blitz, civil defence measures to protect the public were inadequate. The British government had not taken on board the idea of constructing large air-raid shelters, instead relying on semi-private initiatives such as Anderson family shelters.

After some initial reluctance, the underground railway system in London was made available as air-raid shelters, a decision which saved thousands of lives.

In the spring of 1941, British defences started to improve, with an increase in the numbers of anti-aircraft guns and searchlights. Key areas became radar-controlled to improve accuracy. Bristol Beaufighter aircraft, fitted with their own radar, were also introduced. The improvements made a quick impact on Luftwaffe casualty figures, which increased from 28 in January to 124 in May of 1941.

It was in that same month of May 1941 that the Blitz effectively came to an end. Hitler's decision to invade the Soviet Union meant the Luftwaffe had insufficient resources to conduct a war on two fronts. The German aircraft were redeployed to the east.

However, the Germans staged a final, vindictive flurry: on May 10 1941, a raid on London resulted in the highest nightly casualty figure of the Blitz, with 1,364 killed and 1,616 seriously wounded.

Interesting fact: The Blitz failed mainly because the Luftwaffe did not develop a methodical strategy for destroying the British war industry. The bombing effort was aimed at cities and several sets of industries instead of constant pressure on the most vital parts of the British war machine.