Mulberry harbour – The Allies needed harbours in order to land hundreds of thousands of men after the D day landings. They used hollow blocks of concrete. 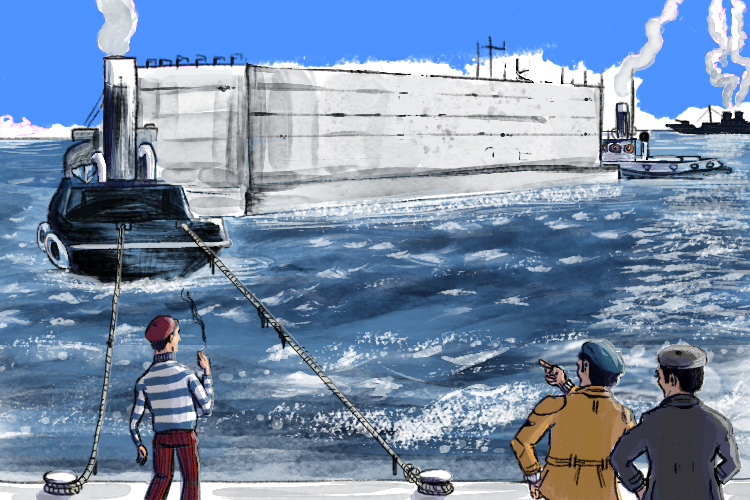 Mull over why they wore berets (Mulberry) on the harbour on the shoreline of the Normandy beaches. Is it because they have finally been taken to France?

Mulberry Harbours were portable harbours developed by the British during World War II. Two were used immediately following the D-Day Landings in June 1944 to enable rapid offloading of troops, vehicles and equipment onto beaches.

Mulberry B at Gold Beach was in use for ten months following D-Day. More than 2.5 million men, 500,000 vehicles and 4 million tons of supplies were landed via it before it was decommissioned.

The partially-completed Mulberry A at Omaha Beach was damaged on June 19, 1944, by a violent storm which lasted for three days. After the storm abated, the damage was found to be so severe that the harbour had to be abandoned.

The parts of the Mulberry Harbours were made in secrecy in Britain and then floated across the English Channel into position immediately after D-Day.

Each Mulberry Harbour comprised about six miles of flexible steel roadways that floated on steel or concrete pontoons. The roadways terminated at pierheads that were jacked up and down on legs which rested on the seabed.

The structures were protected by sunken caissons – massive chambers filled with water to keep them on the seabed. It was estimated that the construction of the caissons alone required 330,000 cubic yards (252,000 cubic metres) of concrete, 31,000 tons of steel and 1.5 million yards (1.37 million metres) of steel shuttering.

Interesting fact: Around 45,000 people in 300 engineering companies around Britain worked on the Mulberry Harbours project.