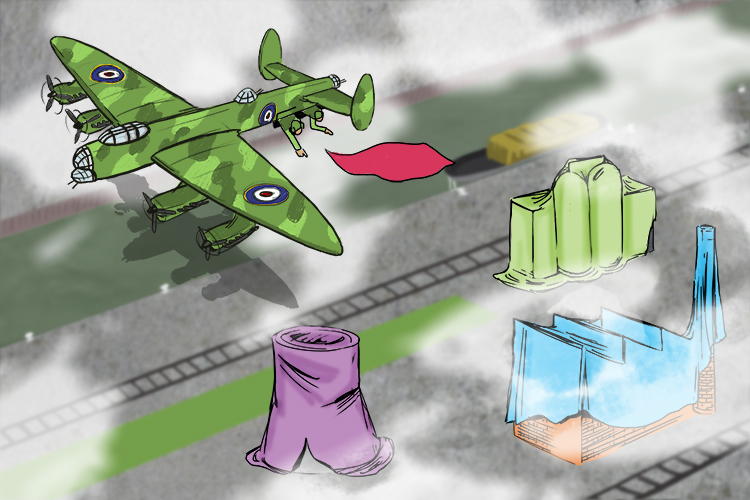 They pointed out of planes as they dropped blankets directly over (Pointblank Directive) German factories.

The Pointblank Directive was an agreement between the Combined Chiefs of Staff of Britain's RAF and the United States Army Air Forces (USAAF) to give top priority to the destruction of German aircraft and submarine manufacturing facilities.

The Allies were planning their invasion of Northwest Europe and particularly wanted to cripple or destroy the German's fighter aircraft strength before the invasion began.

The directive was issued in June 1943. Up to then, the RAF and USAAF had mainly been attacking Geman industry in their own ways. The British had conducted broad night attacks on industrial areas while the USAAF had conducted "precision attacks" by day on specific targets.

The Luftwaffe (German air force) was forced into defending against the newly-directed raids on its aircraft and submarine manufacturing sites, its fighters being drawn into battle with the bombers and their escorts.

German aircraft losses in these battles, rather than the raids themselves, reduced the Luftwaffe's strength despite an actual increase in German aircraft production.

Interesting fact: The Pointblank Directive ended in April 1944 when Allied strategic air forces came under the command of U.S. General Dwight D. Eisenhower. He needed them for support in Operation Overlord – the invasion of Northern France.