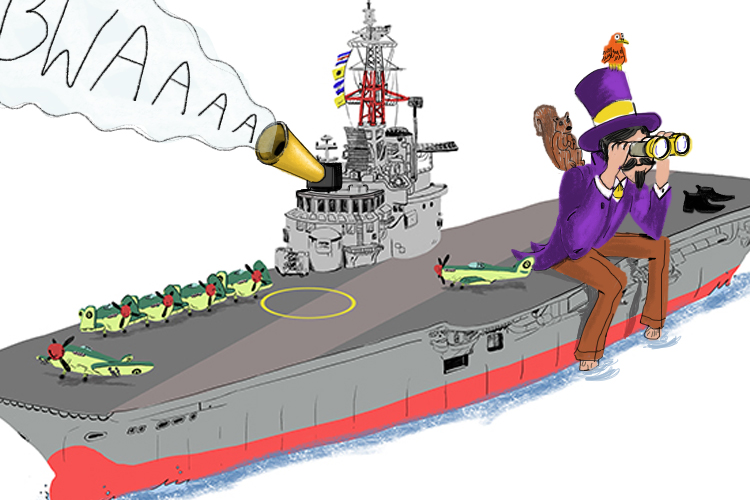 After the Japanese attack on Pearl Harbor, Hawaii, on December 7 1941, America's President Roosevelt told his military to find a way of striking back against Japan.

One result of this was the Doolittle Raid on the Japanese capital, Tokyo.

A special unit of USAAF B-25 Mitchell bombers – which were much bigger than naval aircraft – was trained under Colonel James Doolittle to take off from the aircraft carrier USS Hornet.

The unit was to drop its bombs then fly on to land in an area of China controlled by the pro-Allied Nationalists.

Colonel Doolittle and his sixteen bombers took off from the USS Hornet, which had sailed to within about 650 miles of Japan, on April 18, 1942. The take-off from a short runway was quite a feat for relatively heavy aircraft laden with bombs and fuel.

The bombers suffered little damage from enemy action – almost all succeeded in bombing Japanese targets, mostly in Tokyo but also in Kobe, Yokosuka, and Osaka.

After the attack, all of the aircraft ran short of fuel. One diverted and landed in Soviet Russia. The other fifteen headed for Nationalist China but had to abandon plans to land at airfields. Instead, they crash-landed or bailed out.

Three crew members were killed and eight were captured by the Japanese, who subjected them to torture and starvation. All of the aircraft were lost.

The raid caused little material damage to Japan but had major psychological effects. In the US, it raised morale. In Japan, it raised doubts about the ability of military leaders to defend the home islands.

Interesting fact: Because the American naval force had been spotted by the Japanese, the launch of the B-25 bombers was made 650 miles from Japan, instead of 400 miles as originally planned.