The French Fleet at Toulon – German troops were held up at the base's entrance. The delay allowed the French to blow up their own ships 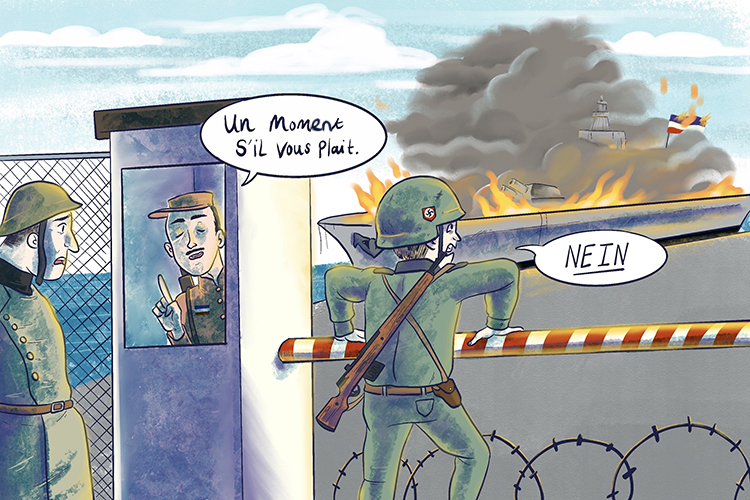 Held up for too long (Toulon) at the base's entrance, thus allowing the French to blow up their own ships.

After Germany invaded France in 1940, the two countries signed an "armistice" which divided France into two parts.

The northern and western areas – facing the English Channel and the Atlantic Ocean – were occupied and administered directly by Germany.

The southern area, facing the Mediterranean and including the port city of Toulon, was controlled by a toothless French administration – a "puppet government" – that had its administrative centre in the city of Vichy. Many referred to this as the "Vichy Regime".

In November 1942, Hitler gave orders to begin the full occupation of Vichy France, a central part of his plan being to capture the French fleet, which had been docked at Toulon since 1940.

A fast-moving force of Germans entered Toulon and took control of the city. The French Commander of the Fleet, Admiral Jean le Laborde, aboard the flagship Strasbourg which was anchored at Toulon along with the rest of the fleet, quickly took command of the situation. He ordered his sailors to scuttle (wreck) their ships and fire on any German troops who approached.

Laborde and his fellow senior French navy officers did not want to see their ships used by the Nazis and the crews felt no loyalty towards the Germans occupiers.

At the gates to the harbour, the Germans were kept out as long as possible by the French officer in charge, who demanded authorisation documents and further paperwork. These delaying tactics gave the French sailors time to prepare for the scuttling.

As the Germans finally attempted to board the French ships, one by one the ships sank to the bottom of the bay. Sporadic fighting broke out as thick black smoke billowed from the ships.

This represented a great loss to the Nazi war effort – Hitler's plan was that the French fleet would be put at the disposal of Italy, which would have been a great blow to the Allies.

At the final reckoning, the German's were able to capture just a few remaining ships from the fleet, and most of these were either damaged or of little military value.

Interesting fact: After the war, Admiral Jean le Laborde was sentenced to death by the Haute Cour de Justice (French Parliament sitting as High Court) for treason and for failing to save the fleet, which the court believed he could have done by allowing it to defect to the Allies before the Germans tried to take it over. His sentence was commuted to life imprisonment and he was pardoned on June 9, 1947. He died in 1977, aged 98.