Evacuation of Allied soldiers during World War II from the beaches of Dunkirk in the North of France over nine days between May 26 and June 4 1940. 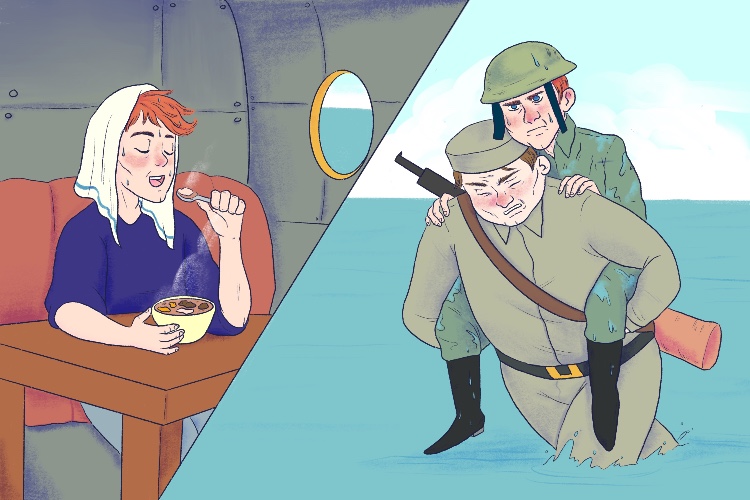 Being dunked in the sea irked him (Dunkirk) but as soon as he dined for a moment (Dynamo) he felt better.

In the early stages of World War II, the British, French and Belgian Governments seriously underestimated the strength of German forces. As a result, the British Expeditionary Force in France, as well as French, Canadian and Belgian troops, found themselves fighting against overwhelming odds.

The Allied troops had no choice but to retreat to the harbour and beaches of Dunkirk. They were trapped – sitting ducks for the German forces.

In response, on May 26, 1940 – ten days after he became Prime Minister – Winston Churchill ordered the start of Operation Dynamo, to rescue as many troops as possible from Dunkirk.

The destroyers and transport ships that were sent were expected to lift off about 30,000 troops only.

Then, in one of the most widely debated decisions of World War II, Adolf Hitler ordered his generals to halt for three days. This gave the Allies more time to organise the evacuation.

Although there was heavy fire from German fighter and bomber aircraft on the beaches, no full-scale German attack was launched. In the end, more than 330,000 Allied troops were rescued.

There were problems – the harbour became blocked by ships sunk by the German air raids, so troops had to be taken off the beaches rather than the harbour side. Because of shallow water, small ships were needed to ferry troops from the beaches to the big ships.

About 700 “little ships” sailed from the harbours of Southern England to Dunkirk. These included motor yachts and fishing boats.

Interesting fact: The phrase “the Dunkirk spirit” is still used today to describe the way British people can work together in the face of adversity.