Battle of Britain – A war fought in the skies over Britain

The Royal Air Force defended the skies over the United Kingdom against the German air force from July 10 to October 31, 1940. It was called the Battle of Britain, but it should be called "the Battle of Britain in the Skies" because the only battles that occurred during this period took place in the skies. 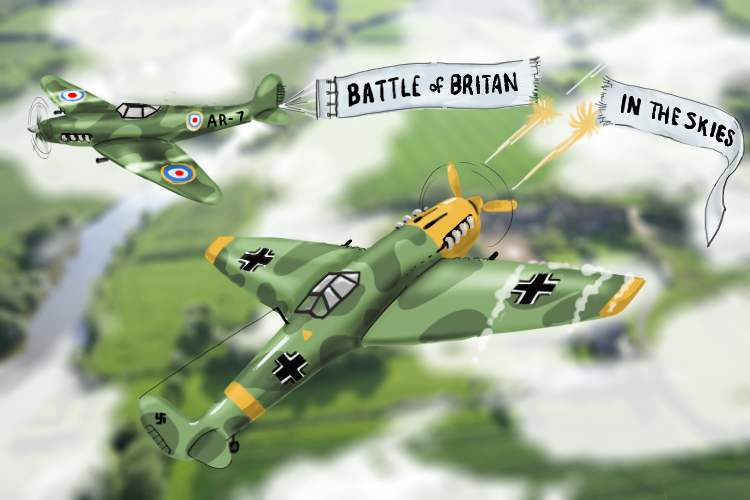 Adolf Hitler had a plan for an invasion of Britain (it was called Operation Sealion), but he realised that Germany would, first of all, have to secure control of the skies in southern England.

He thought a sustained attack on Britain's airfields and communication centres would remove any threat from the air when Sealion launched.

He was wrong, of course. The RAF met the challenge of Germany's Luftwaffe (air force) with some of the best fighter aircraft in the world – the Hawker Hurricane and the Supermarine Spitfire.

Britain had developed an air defence network that would give it a critical advantage in the Battle of Britain: the Dowding System – named after Fighter Command’s Commander-in-Chief Sir Hugh Dowding. It brought together technology, ground defences and fighter aircraft in a unified system of defence and allowed Fighter Command to manage its valuable – and relatively limited – resources most effectively.

The Germans started by attacking coastal targets and British shipping operating in the English Channel, then shifted their focus inland. They concentrated on airfields and communications centres. Although under intense pressure, Fighter Command offered stiff resistance.

There was significant damage to airfields, particularly those in the south-east, but most of them remained operational. On August 31 Fighter Command suffered its worst day of the battle, but the Luftwaffe (German air force) overestimated the damage and wrongly came to the conclusion that the RAF was on its last legs.

On September 7, the Germans shifted their attacks away from RAF targets and onto London. This proved to be a huge mistake. While the raids had devastating effects on London’s residents, they also gave Britain’s defences time to recover.

On September 15 Fighter Command repelled another massive Luftwaffe assault, inflicting severe losses that were becoming increasingly unsustainable for the Germans.

Although fighting would continue for a few more weeks, it was plain that the Luftwaffe had failed to secure the air superiority Germany needed for invasion. Operation Sealion was indefinitely postponed by Hitler.

Nearly 3,000 flyers fought on the British side in the Battle of Britain. Of these, just over 500 died in action.

Interesting fact: Wartime Prime Minister Winston Churchill paid tribute to the Battle of Britain airmen in a famous speech, saying: "Never in the field of human conflict was so much owed by so many to so few." Even today, the airmen who took part are referred to as "The Few".