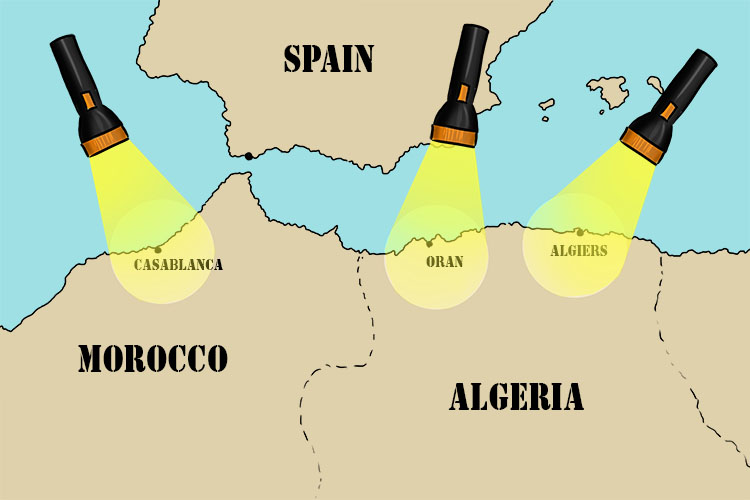 The torches (operation Torch) shone on the map where the Allies would invade North Africa.

Operation Torch was the invasion of French Morocco and Algeria by the Americans and British in November 1942.

The main objective was to secure bridgeheads for opening up a second front to the rear of German and Italian forces battling against the British in neighbouring Libya and Egypt.

It was also hoped to relieve pressure on the Soviet Union by imperilling Axis forces in North Africa, and to enable an Allied invasion of Southern Europe the following year.

After undetected crossings from the U.S. and Britain, a fleet of 350 warships and 500 transporters carrying around 107,0000 troops assembled off the coast of French North Africa. They began their landings on November 8.

The Vichy Regime – a "puppet government" set up by the Germans in France and some of its colonies – had 125,000 soldiers stationed in Morocco, Algeria and Tunisia and the invading Americans and British had to overcome these. There was an assumption that resistance would be minimal.

However, the Vichy troops proved more stubborn than expected, particularly in Oran and Casablanca. At Algiers, the Eastern task force was helped by a successful coup by the French Resistance, which largely neutralised the Vichy forces before the Allied landings even took place.

Generally, the landings at all three beaches were highly successful. After consolidating their forces, the Allies moved out in the direction of Tunisia, towards Germany's Afrika Korps troops who were retreating westwards after Field Marshal Montgomery's success at El Alamein.

Interesting fact: Operation Torch notched up at least two firsts: It was the first time the British and Americans had worked on an invasion plan together, and the operation included the first large-scale American airborne drop when the 509th Parachute Regiment captured two airfields near Oran.